Religious “nones” are not only growing as a share of the U.S. population, but they are becoming more secular over time by a variety of measures, a fact that also is helping to make the U.S. public overall somewhat less religious, according to surveys done as part of our Religious Landscape Study. 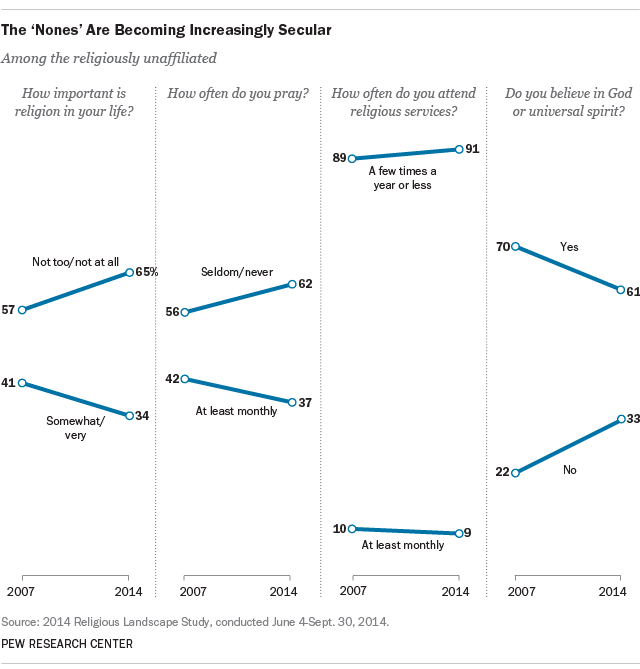 The “nones,” a category that includes people who self-identify as atheists or agnostics, as well as those who say their religion is “nothing in particular,” now make up 23% of U.S. adults, up from 16% in 2007. But there is more to the story. To begin with, this group is not uniformly nonreligious. Most of them say they believe in God, and about a third say religion is at least somewhat important in their lives.

At the same time, between the Pew Research Center’s two Religious Landscape Studies – conducted in 2007 and 2014 – we also see consistent evidence that the “nones” are becoming less religious. For example, the share of religious “nones” who say they believe in God, while still a majority, has fallen from 70% to 61% over that seven-year period. Only 27% of “nones” are absolutely certain about God’s existence, down from 36% in 2007. And fully a third of religiously unaffiliated Americans (33%) now say they do not believe in God, up 11 percentage points over that time.

Similar trends are seen on some other key measures of religious engagement. The share of religious “nones” who say they seldom or never pray has risen by 6 points in recent years, and now stands at 62%. And a bigger proportion of the unaffiliated now say religion is not important in their lives (65%) than said this in 2007 (57%).

Data from the survey can be combined with U.S. population figures to estimate the total number of what might be thought of as “nonreligious” Americans at 36.1 million in 2014. (These are adults who are not affiliated with a religious group and who also say religion is not important in their lives.) As of 2007, there were only 21 million “nonreligious” adults who fit this description.

The question of why the “nones” are growing less religious does not have a simple answer. But just as is the case for why “nones” are growing as a share of the U.S. public, generational replacement appears to be playing a role. Religiously unaffiliated Americans are younger, on average, than the general public to begin with, and the youngest adults in the group – that is, those who have entered adulthood in the last several years – are even less religious than “nones” overall.

Fully seven-in-ten of these youngest Millennials (born between 1990 and 1996) with no religious affiliation say religion is not important in their lives. A similar share (70%) also say they seldom or never pray and 42% say they do not believe in God, all bigger percentages than among religious “nones” as a whole.

Modeling the Future of Religion in America