As smartphone adoption continues to climb in the U.S., mobile applications, or apps, are becoming increasingly important tools that offer access to everything from news and social networking sites to online banking and maps. But even free apps can involve potential tradeoffs when it comes to permitting access to personal devices and information.

A new Pew Research Center report examines more than 1 million apps available in the Google Play Store from June to September 2014 and explores the wide range of permissions that Android apps require as a condition of use. (In the Android operating system, “permissions” are what app developers use to inform users about how the app will interact with the device and personal information.)

Additionally, Pew Research surveyed Americans about their privacy concerns relating to apps and found many are cautious when it comes to how apps use their personal data.

Our analysis of permissions focused on Android apps, which are not representative of all apps on all platforms. We used Android apps for the study because data for them are more readily available to the public.

Here are five takeaways from the report: 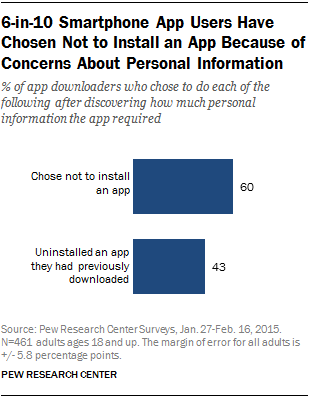 Among all smartphone app users, six-in-ten downloaders have chosen not to install an app when they discovered how much personal information the app required in order to use it. Separately, 43% have uninstalled an app for the same reason after initially downloading it.

2Among all smartphone owners who have downloaded apps before, a majority cited concerns about how their personal data are used as a reason why they would or would not download an app. Nine-in-ten app downloaders say that having clear information about how their data will be used is “very” or “somewhat” important when choosing whether or not to download an app.

The most common Android app permissions allow access to a smartphone’s internet connectivity. The average app requested five permissions before installation, and the two most common permissions sought by Android apps help those apps access the internet. These include the “Full network access” permission (used by 83% of apps), which allows an app to access whatever network the device is connected to at the time, as well as the “View network connections” permission (used by 69% of apps). The latter type of permission enables an app to see what networks the device is able to access. The third- and fourth-most-common permissions allow apps to access memory or available storage on the phone, a feature apps would need in order to save content to the device.

5 A majority of Android apps we analyzed were free. Some 82% of apps in the Google Play Store from June through September 2014 were free to download, while 18% required purchasing before being able to download. On average, free apps ask for two more permissions than paid apps (six permissions vs. four).

Note: Details on the full methodology of the report are available here.

Mobile apps collect information about users, with wide range of permissions
What we learned about surveying with mobile apps
Many smartphone owners don’t take steps to secure their devices
Q&A: How and why we studied online dating in the U.S.
Americans are changing their relationship with Facebook