The European Union is awash with languages. There are 24 official languages in the EU and more than 60 indigenous regional or minority languages. Despite this linguistic diversity, European students study one foreign language far more than any other: English.

Roughly three-quarters (77%) of primary school students in the EU learn English as a foreign language, according to data from Eurostat. This includes all or nearly all young students in Austria, Malta, Italy, Spain and Cyprus.

By comparison, German and French, the next most popular foreign languages, were studied by only 3.2% and 3% of EU primary school students, respectively.

Luxembourg and Belgium, each with three official languages, have the lowest share of primary school pupils studying English as a foreign language. In both countries, students frequently study one of the official languages, typically French or German, instead of English. 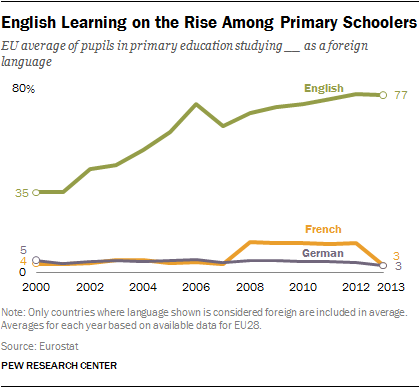 Learning English has been growing more popular in EU nations, with the share of young students studying English as a foreign language more than doubling from just 35% in 2000. Meanwhile, the share of young students studying French and German has remained below 15%. Governments (and parents) may have their eye on preparing students for a global economy in which English is seen as the dominant language.

In the U.S., by contrast, only 25% of elementary schools even offered foreign languages as of 2008, the latest data available.

While most European students are introduced to English in primary school, learning English is even more popular among those in upper secondary school (roughly equivalent to U.S. high school). More than nine-in-ten upper-secondary students (94%) in the EU learn English, compared with fewer than a quarter who learn French (24%), German (20%) or Spanish (18%).

In addition, the average European student studies more than one foreign language in school, unlike their U.S. counterparts. In fact, studying a second foreign language for at least one year is compulsory in more than 20 European nations. The U.S. has no similar national requirement. 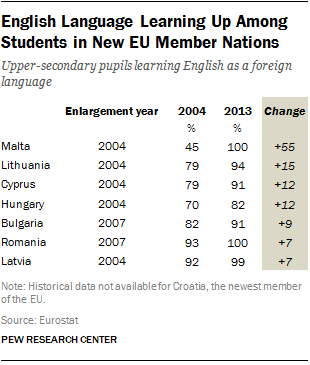 New EU members have seen an increase in their share of English language learners. Seven of 12 nations that joined the EU in the past 11 years saw a significant increase between 2004 and 2013 in the percentage of upper-secondary students learning English (data are unavailable for a 13th country, Croatia).

But English language learning has not completely replaced Russian language learning in the former Soviet bloc nations of the EU. In fact, there have been significant increases in the share of upper-secondary students learning Russian in Latvia, Slovakia and Estonia. In 2004, 44% of Latvian high schoolers were taking Russian. That number jumped 13 percentage points to 57% of high school students in 2013. Slovakia and Estonia saw increases of 12 points and 9 points, respectively, over the same time period.