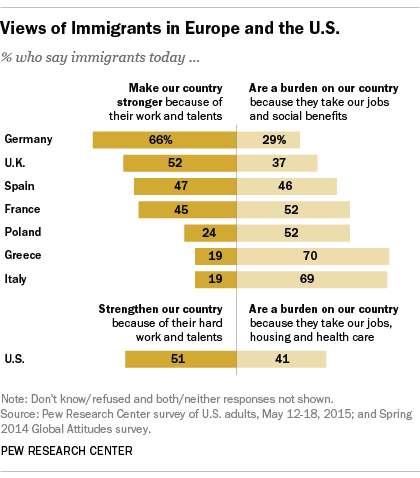 Pope Francis has urged European Catholics to take in some of the thousands of migrants streaming in from Syria and other countries amid the world’s largest refugee crisis on record, and in his address to Congress today he urged leaders to welcome and respect immigrants coming to the U.S.

But just how closely public opinion aligns with the pope’s more benevolent attitude toward immigrants varies greatly. Germans, the British and Americans hold the most positive views of immigrants, while Greeks and Italians hold the most negative views, according to surveys conducted by Pew Research Center in the U.S. and seven European nations.

The United States is home to world’s largest immigrant population (41 million), and is by far the largest economy of any nation surveyed, but views of immigrants are mixed. Half (51%) of Americans this year said immigrants make the U.S. stronger because of their hard work and talents. Meanwhile, 41% said immigrants are a burden because they take jobs, housing and health care. American attitudes toward immigrants are more positive today than they were in 1994, when just 31% of Americans said they’re a strength and twice as many – 63% – called immigrants a burden. 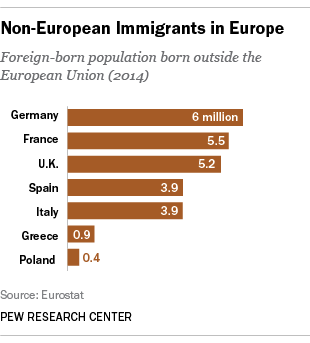 While the U.S. has more immigrants than the European Union (in the EU, immigrants include only those not born in an EU country), Europe has been disproportionately impacted by a refugee crisis that has accelerated since 2011 due to the war in Syria. In 2014, Europe saw the largest increase (51%) in the share of refugees taken in of any region in the world. (While an immigrant may be anyone who is foreign born, refugees are defined by the United Nations as people who have left their home countries due to a “well-founded fear of being persecuted for reasons of race, religion, nationality, membership of a particular social group or political opinion.”)

Germany is Europe’s economic engine and its most populous nation. It is also home to 6 million immigrants born outside of the EU, the most of any EU country. Attitudes toward immigrants are even more positive there than in the U.S. In 2014, two-thirds (66%) of Germans said immigrants are a strength because of their hard work and talents, while just 29% said immigrants are a burden because they take jobs and social benefits.

However, among the European countries surveyed in 2014, Germans had among the most negative views of immigrants when it comes to crime, with about half (48%) of Germans saying immigrants make crime worse in their country. In addition, Germans were among the most likely to say immigrants are failing to assimilate: About six-in-ten Germans (59%) said immigrants today want to be distinct from German society.

People in Greece and Italy have among the most negative views toward immigrants of the European countries surveyed. Besides the fact that both nations’ economies have struggled since the recession, they both felt the impact of the first waves of African and Middle Eastern migrants.

In both countries, about seven-in-ten said immigrants are a burden. The nations also have some of the most negative views of immigrants on crime, with about half in Greece (51%) and Italy (45%) saying immigrants are more to blame for crime than other groups.