SPOILER ALERT: If you haven’t already done so, test yourself with our new Science Knowledge Quiz. We discuss one of the answers to the questions below. 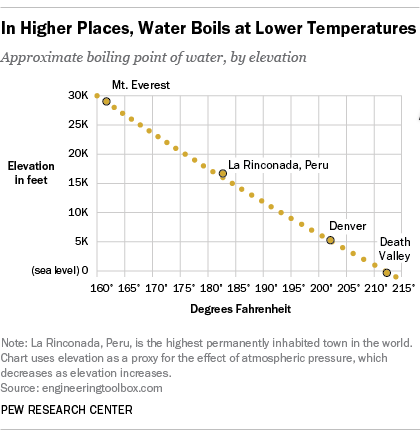 It seems like one of those basic science facts: Water boils at 212 degrees Fahrenheit (100 degrees Celsius), right? Well, not always. It depends on where you’re doing the boiling.

In fact, water will boil at about 202 degrees in Denver, due to the lower air pressure at such high elevations. In Pew Research Center’s recent survey on science knowledge, only 34% of Americans knew that water boils at a lower temperature in the Mile High City than in Los Angeles, which is close to sea level. This was the question in our quiz that the fewest people answered correctly: 26% said they thought water would boil at a higher temperature in Denver, while 39% said it would boil at the same temperature in both places.

The boiling point of water, or any liquid, varies according to the surrounding atmospheric pressure. A liquid boils, or begins turning to vapor, when its internal vapor pressure equals the atmospheric pressure. For instance, when you heat your tea kettle on a stovetop, you’re creating more water vapor; when the water’s vapor pressure rises enough to exceed the surrounding air pressure, bubbles start to form and the water boils.

But pressure drops as you gain elevation – say, by driving from Los Angeles to Denver – because there are fewer air molecules pressing on you. In Denver, the atmospheric pressure is only about 12 pounds per square inch, compared with 14.7 pounds per square inch in Los Angeles. With that much less pressure, you don’t need to apply as much heat to push vapor pressure beyond the surrounding atmospheric pressure – in other words, water boils at a lower temperature. Putting a liquid in a partial vacuum also will lower its boiling point. The reason is the same: By removing some of the air surrounding the liquid, you’re lowering the atmospheric pressure on it.

In La Rinconada, a mining town in the Peruvian Andes that, at more than 16,700 feet, is the highest permanently inhabited town in the world, water will boil at about 181 degrees. Were you of a mind to brew yourself a nice cup of tea at the peak of Mount Everest (29,029 feet), you’d only have to bring your water up to about 162 degrees for it to boil. At another extreme, in Death Valley, Calif. – the lowest point in the U.S., at 282 feet below sea level – water boils at slightly above 212 degrees.

The lower atmospheric pressures at high elevations affect cooking and baking, too, which is why many recipes and mixes come with special “high altitude” directions. Cooking generally takes longer at elevations above 3,000 feet or so, and foods tend to dry out faster. Doughs will rise faster (because gases expand more) and liquids in batters evaporate faster.