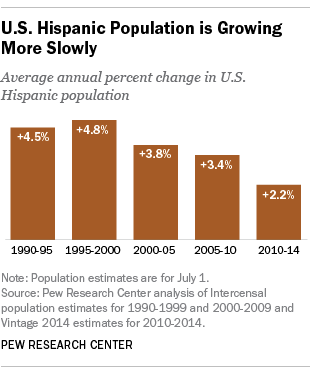 The U.S. Hispanic population has been a key driver of the country’s population growth since at least 2000. But the group’s growth has slowed in recent years, and that trend continued in 2014, as evidenced by new figures released early today by the U.S. Census Bureau. 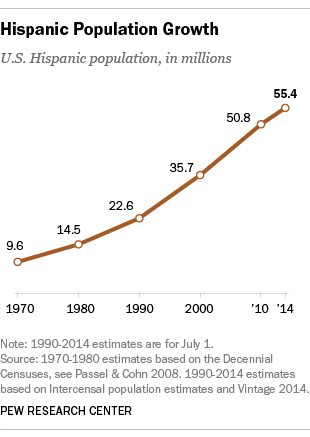 The Census Bureau’s annual population estimates detail the nation’s demographics in a variety of categories, including race and ethnicity, geography, and age. For example, the county with the highest Hispanic population by far is Los Angeles County in California (4.9 million), followed by Harris County in Texas (1.9 million) and Miami-Dade County in Florida (1.8 million).

The data showed no change in ranking among the states with the highest Hispanic populations. California still leads the list (15.0 million), followed by Texas (10.4 million) and Florida (4.8 million). Together, these three states account for more than half (55%) the Hispanic population. But their share is down from 58% in 2000, reflecting a wider dispersion of the nation’s Hispanic population over the past decade and a half.

In addition, the new Census Bureau estimates show that Hispanics, with a median age of 29 years, are younger than most other racial or ethnic groups. By comparison, the median age for non-Hispanic blacks is 34; it’s 43 for non-Hispanic whites and 36 for Asians. But Hispanics are growing older: In 2010, the group’s median age was 27, up from 26 in 2000.