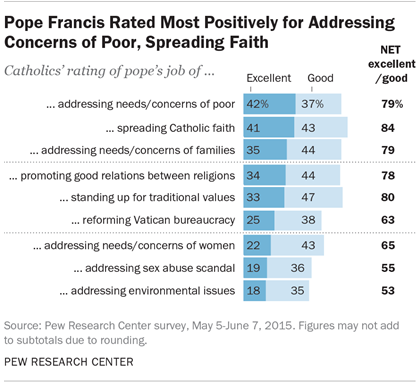 Although Pope Francis is no stranger to headlines, he has drawn an unusually large amount of media attention in the past week for two reasons: He approved a new tribunal to address bishops involved in the sex abuse scandal, and he is set to release a new encyclical on environmental issues and climate change.

It is unclear what impact these new developments might have on views of the pope. But before these actions, U.S. Catholics did not rate Francis’ performance in addressing the sex abuse scandal and the environment as highly as they did for other issues.

To be sure, at least half of U.S. Catholics think Francis is doing a “good” or “excellent” job on the sex abuse issue and the environment. Over half (55%) of Catholics rated Francis positively on addressing sex abuse (19% “excellent,” 36% “good”), and 53% gave him high marks on environmental issues (18% “excellent,” 35% “good”), according to our survey conducted in May and early June. But out of nine areas where respondents were asked to rate the pope, these were the two in which Francis drew the least positive ratings.

For example, far more Catholics say Francis is doing a good or excellent job addressing the needs of the poor (79%, including 42% who rate Francis as “excellent” on this topic). Fully, 84% of American Catholics say Francis has done well at spreading the Catholic faith. Similarly about eight-in-ten give him high marks on addressing the needs of families, promoting good relations between religions and standing up for traditional values.

When it comes to environmental issues, Catholic Democrats are far more likely than Catholic Republicans to believe that global warming is happening, to see it as a very serious problem and to say it is caused by humans (much like members of the different parties in the general public). But partisan views are more similar on the question of whether Pope Francis is doing well addressing environmental issues. Among Catholic Democrats, 58% say the pope is doing a good or excellent job on the environment (including 21% “excellent”), while roughly half of Catholic Republicans say the same (51%, including 13% “excellent”).

Catholic Republicans and Democrats have nearly identical feelings about the pope’s performance on the sex abuse scandal. However, different age groups feel differently about this issue. Younger Catholics (ages 18-29) are less likely than their older counterparts to see Pope Francis as doing a good or excellent job handling the scandal. Fewer than half (44%) of younger Catholics hold that view, compared with larger shares among older age groups.