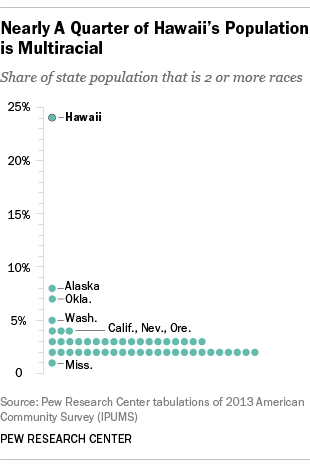 The number of multiracial Americans is growing nationwide, but in Hawaii, it’s nothing new. The Rainbow State – with its history of attracting immigrants from Asia and other parts of the world to work as farm laborers – stands far above the rest, with nearly one-in-four residents (24%) identifying as multiracial, according to a Pew Research Center analysis of Census Bureau data. The next most-multiracial states are far behind: Alaska (8%) and Oklahoma (7%).

Here’s another way to look at how much Hawaii stands out: In terms of total population, Hawaii is one of the smallest (1.4 million people), ranking 40th out of 50 states. But when ranking states with the highest total multiracial population, the state ranks sixth, with more than 330,000.

For this state analysis, we used Census data because the Pew Research survey did not have an adequate sample size for state-level analysis. (Delaware, Montana, North Dakota, South Dakota, Vermont and Wyoming were not analyzed due to the small number of multiracial people interviewed in those states.) 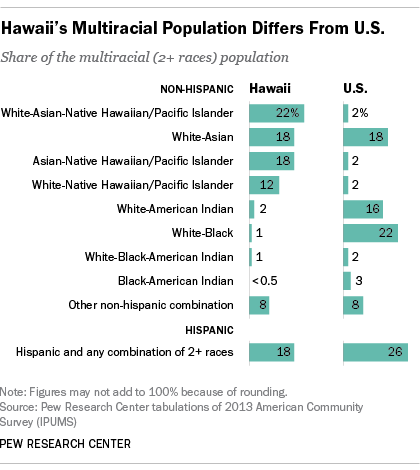 There are other states that have multiracial concentrations that differ from the nation as a whole. In the western states of California and Washington, biracial white and Asian is the largest multiracial group. (California is home to the nation’s largest Hispanic population, but Hispanic origin is considered an ethnicity and not a race by the Census Bureau. Hispanics are not included in the analysis of racial groups.)

The states where biracial white and American Indian is the majority of a state’s multiracial population include Oklahoma (61%) and Maine (53%).

How Pew Research Center conducted its survey of multiracial Americans
Key findings about multiracial identity in the U.S. as Harris becomes vice presidential nominee
American Indian and white, but not 'multiracial'
After 200 years, Native Hawaiians make a comeback
Key facts about Asian Americans, a diverse and growing population