What will the world’s religious landscape look like a few decades from now? A new Pew Research Center study attempts to answer that question by projecting the changing size of eight major global religious groups through the year 2050 based on a variety of demographic factors.

The study uses data from 198 countries and territories on fertility, age composition and life expectancy. It also looks at rates of religious switching – where data is available – and migration between countries, and puts all of these factors together to provide the best estimates for the future.

There are many storylines in this data, which can be explored through the full report or on our interactive Global Religious Futures website. Here are a few of the key findings:

1Muslims are the fastest-growing major religious group, largely because they have the highest fertility rate and the youngest population. As a result, the Muslim population is expected to increase from 1.6 billion people (23% of the world’s population as of 2010) to 2.76 billion people (30% of all people in 2050). At mid-century, Muslims will nearly equal Christians – the world’s largest religious group – in size. 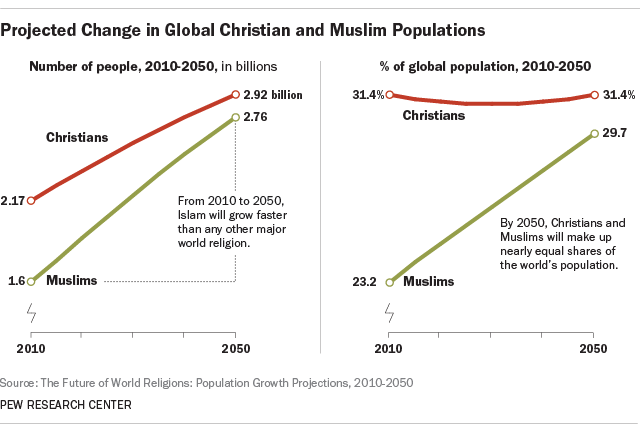 2The share of the world’s population that is Christian is expected to remain steady (at about 31%), but the regional distribution of Christians is forecast to change significantly. Nearly four-in-ten Christians (38%) are projected to live in sub-Saharan Africa in 2050, an increase from the 24% who lived there in 2010. And the percentage of the world’s Christians living in Europe – which fell from 66% in 1910 to 26% in 2010 – will continue to decline, to roughly 16% in 2050.

3The number of religiously unaffiliated people, also known as religious “nones,” is increasing in places such as the United States and Europe, and we project continued growth. Globally, however, the opposite is true: The unaffiliated are expected to decrease as a share of the world’s population between 2010 and 2050 (from 16% to 13%). This is attributable mostly to the relatively old age and low fertility rates of large populations of religious “nones” in Asian countries, particularly China and Japan. 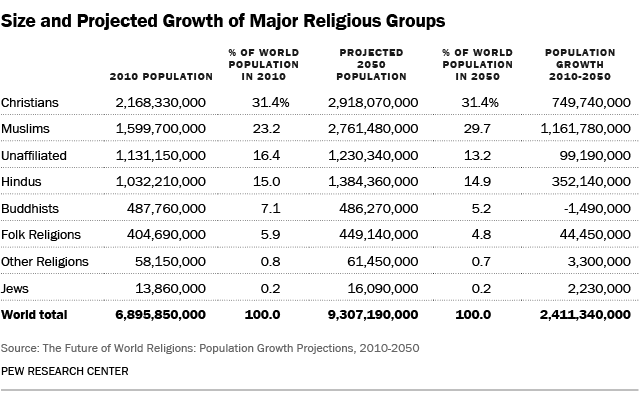 4In the United States, Christians will decline from more than three-quarters of the population in 2010 to two-thirds in 2050, with corresponding rises of religious “nones” as well as Muslims, Hindus and others. At mid-century, Judaism will no longer be the largest non-Christian religion in the U.S.: Muslims are projected to be more numerous than people who identify as Jewish on the basis of religion.

5Buddhists, concentrated in Asia, are expected to have a stable population (of just under 500 million) while other religious groups are projected to grow. As a result, Buddhists will decline as a share of the world’s population (from 7% in 2010 to 5% 2050).

6Indonesia is currently home to the world’s largest Muslim population, but that is expected to change. By 2050, the study projects India to be the country with the largest number of Muslims – more than 310 million – even though Hindus will continue to make up a solid majority of India’s population (77%), while Muslims remain a minority (18%). Indonesia will have the third-largest number of Muslims, with Pakistan ranking second.

7The farther into the future we look, the more uncertainty exists, which is why the projections stop at 2050. But if they are extended into the second half of this century, the projections forecast Muslims and Christians to be roughly equal in number around 2070, with Muslims the slightly larger group after that year.

Key findings on how world religions differ by education