President Barack Obama’s recent interviews with Buzzfeed and Vox attracted considerable attention and comment — both as signs that those digital-media companies are emerging as significant news organizations, and as The New York Times put it, examples of the administration’s ongoing “efforts to connect with millennials and broaden its reach beyond traditional media outlets.” (See also Obama’s 2012 “Ask Me Anything” chat on Reddit, his Instagram account, and the 54.8 million followers of his official Twitter feed.)

Obama’s embrace of online news and social media continues a long tradition of presidents employing the latest communications technologies to speak to Americans directly rather than through the Washington press corps. In honor of Presidents Day, and given our abiding interest in all things tech, here’s a rundown of how presidents have adopted and used the “new media” of their eras.

ABRAHAM  LINCOLN: Lincoln was the first president to make extensive use of the telegraph, which had been invented decades earlier but, as author Tom Wheeler wrote, “remained an outlier to both the people and their government.” Lincoln peppered his generals with orders, advice, reassurances and criticism, even though he had to go next door to the War Department’s telegraph office to send his messages. (Lincoln’s successor, Andrew Johnson, installed the first telegraph room in the White House itself.)

” target=”_blank” rel=”noopener noreferrer”>campaign film: a short, silent re-enactment of McKinley receiving word of his nomination, released in September 1896. McKinley’s inauguration the following March was the first to be filmed; he appeared on film several more times during his presidency, right up to the

” target=”_blank” rel=”noopener noreferrer”>Pan-American Exposition in September 1901 where he was assassinated.

CALVIN COOLIDGE: Although Warren Harding was the first president to install a radio set in the White House, his successor, Coolidge, was the first to actually speak to the American people over the airwaves. On Dec. 6, 1923, when Coolidge delivered his State of the Union address, radio listeners in six cities (Washington, New York, St. Louis, Kansas City, Dallas and Providence) could hear him. According to the next day’s New York Times, “groups of New Yorkers were drawn together to listen intently to the words of their President, not as embalmed text, but as living things while he was in the very act of speaking them. … No competent estimate was obtainable … of the number here who heard the message broadcast, but there was no discoverable instance of a person equipped with a receiving set who did not use it for the purpose.”

The terse Coolidge wasn’t known for his speechifying, but he gave regular radio addresses, and his 1925 inauguration was the first to be broadcast. (He also was the first president to appear and speak in a motion picture with sound, in August 1924.) 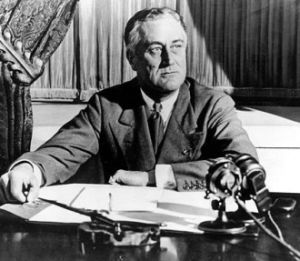 FRANKLIN ROOSEVELT: FDR was generally acknowledged as a master at communicating over the radio, using it to speak directly to the American people in his “fireside chats.” Roosevelt had broadcasting equipment permanently moved into the White House, and he was the first president to appear on television, in a special broadcast from the 1939 World’s Fair (though he was only seen on a handful of TV sets in New York).

BILL CLINTON: As the Democratic nominee in June 1992, Clinton famously

” target=”_blank” rel=”noopener noreferrer”>played his saxophone on The Arsenio Hall Show; as president in April 1994, he even more famously went on MTV’s Rock the Vote and answered a young woman’s question about whether he wore boxers or briefs.

The first White House website was launched on Oct. 21, 1994, and Clinton was the first president to use email, though he wasn’t exactly an enthusiastic user. In a 2011 speech, Clinton recalled that he “sent a grand total of two emails as president — one to our troops in the Adriatic, and one to John Glenn when he was 77 years old in outer space,” adding, “I figured it was OK if Congress subpoenaed those.” (When Clinton, who was vacationing with friends in Arkansas at the time, learned that Glenn wanted to email him from the space shuttle, he had to borrow a laptop from the White House physician.)

Health issues topped the list of scientific studies reaching wide audiences in 2016
The Media Primary: How News Media and Blogs Have Eyed the Presidential Contenders
Obama, Race and Media Coverage
Obama job approval higher, but views of him are still the most polarized in recent history
Broad agreement in U.S. – even among partisans – on which news outlets are part of the ‘mainstream media’