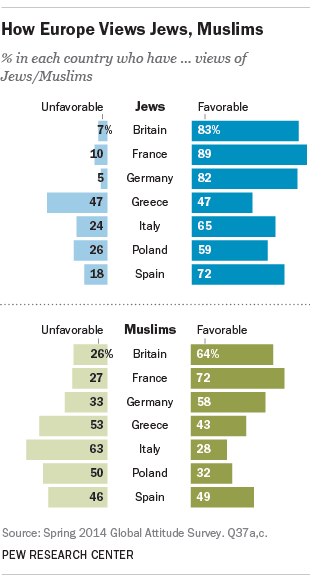 Last week’s killings in Paris at a kosher market have raised new fears among Jews of growing anti-Semitism in France and elsewhere on the continent. The recent violence, carried out by an Islamic radical apparently linked to a separate attack at the headquarters of the Charlie Hebdo newspaper, also has raised concerns among Europe’s Muslim community about reprisal attacks and Islamophobia.

A Pew Research Center survey conducted last year shows that the French held more favorable views of both Jews and Muslims than many other Europeans. Indeed, 89% of French adults held favorable views of Jews, while 72% felt similarly about Muslims.

Positive views of Muslims were also common in Britain (64%) and Germany (58%). But elsewhere, fewer people had a favorable view of Muslims, including roughly a third of the public in both Poland (32%) and in Italy (28%).

Topics
Religion & PoliticsJudaismIslamMuslims Around the World
Share this link: