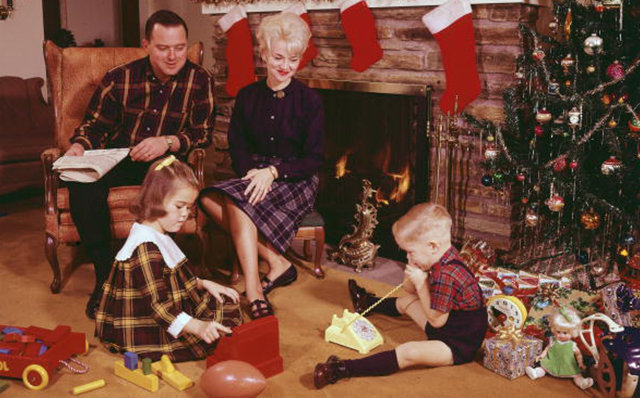 Fewer than half (46%) of U.S. kids younger than 18 years of age are living in a home with two married heterosexual parents in their first marriage. This is a marked change from 1960, when 73% of children fit this description, and 1980, when 61% did, according to a Pew Research Center analysis of recently released American Community Survey (ACS) and Decennial Census data.

Rapid changes in American family structure have altered the image of who’s gathering for the holidays. While the old “ideal” involved couples marrying young, then starting a family, and staying married till “death do they part,” the family has become more complex, and less “traditional.”

Americans are delaying marriage, and more may be foregoing the institution altogether. At the same time, the share of children born outside of marriage now stands at 41%, up from just 5% in 1960. While debate continues as to whether divorce rates have been rising or falling in recent decades, it’s clear that in the longer term, the share of people who have been previously married is rising, as is remarriage.

According to our analysis, today 15% of children are living with two parents who are in a remarriage. It is difficult to accurately identify stepchildren in the ACS data, so we don’t know for sure if these kids are from another union, or were born within the remarriage. However, data from another Census source—the 2013 Current Population Survey (CPS)—indicates that 6% of all children are living with a stepparent.

One of the largest shifts in family structure is this: 34% of children today are living with an unmarried parent—up from just 9% in 1960, and 19% in 1980. In most cases, these unmarried parents are single. However, a small share of all children—4%—are living with two cohabiting parents, according to CPS data. Because of concerns about the quality of the new 2013 ACS data on same-sex marriage, we do not separate out the very small number of children whose parents are identified as in this type of union, but instead fold them into this “single parent” category.

The remaining 5% of children are not living with either parent. In most of these cases, they are living with a grandparent—a phenomenon that has become much more prevalent since the recent economic recession.