The so-called enhanced interrogation techniques put into practice by the Central Intelligence Agency after the September 2001 terrorist attacks and continued in subsequent years during the Bush administration are the focus of a report being released by the Senate Intelligence Committee — and a subject on which Americans have had mixed views. 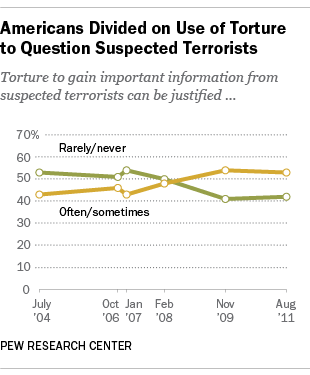 The use of practices like waterboarding began to surface publicly in press reports not long after 9/11, and when the Pew Research Center first surveyed on the subject in July 2004, a narrow majority (53%) said the use of torture to gain important information from suspected terrorists could be only rarely or never justified.

Opinion has shifted since then, with more Americans finding torture acceptable. In August 2011, a narrow majority (53%) of Americans said the use of torture could be often or sometimes justified, while 42% said it could only rarely be justified or not be justified at all.

A more recent poll by Associated Press/NORC conducted in August 2013 found similar results. Half said the use of torture could sometimes or often be justified while 47% said it could rarely or never be justified.

But polling has found that there are differences along party lines with Republicans more supportive than Democrats of torture with suspected terrorists. In our 2011 survey, a substantial majority of Republicans (71%) said torture could be at least sometimes justified, compared with 51% of independents and 45% of Democrats. In the AP/NORC poll, 66% of Republicans backed use of torture in dealing with terrorists compared with 53% of independents and 39% of Democrats.