The recent decision by the Roman Catholic Archdiocese of New York to effectively close dozens of churches in the coming months falls in line with a larger nationwide trend of Catholic parish closures.

The downsizing in New York was described by The New York Times as the largest reorganization in the diocese’s history. The archdiocese, which stretches from Staten Island, Manhattan and the Bronx through the seven suburban counties in the state that are immediately north of New York City, will merge 112 of its parishes into 55 new parishes.

In 1988, there were 19,705 parishes in the U.S., while there are now 17,483, according to the Center for Applied Research in the Apostolate (CARA) at Georgetown University.

The current number of parishes is about equal to the number that existed in 1965, even as the number of self-identified U.S. Catholics has risen in the past half-century, from 48.5 million to 76.7 million between 1965 and 2014, according to CARA’s data.

However, the share of U.S. Catholics who reported attending Mass at least weekly fell by nearly half – from 47% to 24% – between 1974 and 2012, according to the General Social Survey (GSS). And the Times reported that as of last year, according to the New York Archdiocese, only 12% of its members regularly attended Sunday Mass. 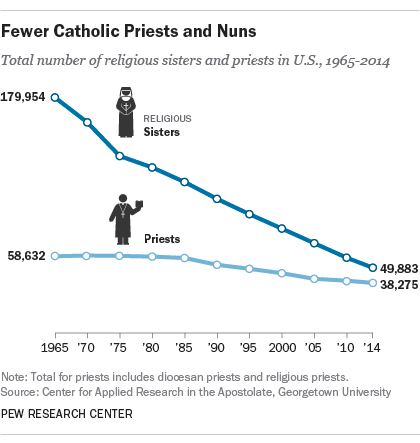 There are a few other possible explanations for the apparent paradox of the growing number of Catholics and the now shrinking number of parishes. For one, the number of priests (as well as nuns) has declined steadily over the past 50 years, potentially leading to staff shortages at parishes. In fact, according to CARA, there are now 3,496 parishes without a resident priest, more than six times as many as there were 50 years ago. Also, the financial ramifications of the clergy sex abuse scandal – including legal costs, settlements and declining donations – have caused economic problems for some dioceses.

Indeed, some parish mergers have been driven by the need to more efficiently use staff and financial resources. Some of these mergers could create what CARA researchers call “million-dollar parishes,” so named because they have large budgets and serve much larger populations. So, in some cases, there are fewer parishes in a diocese serving more people.

Finally, the reduction in parishes has varied by region. Many dioceses in the South and West actually are growing as a result of immigration from Latin America and elsewhere, while the number of parishioners in the Northeast has shrunk in recent years.