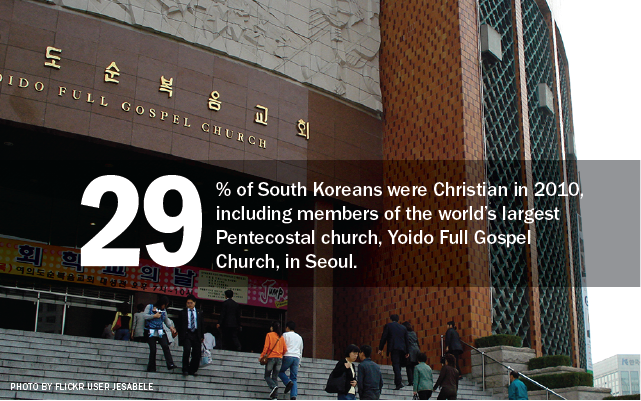 Pope Francis will travel to South Korea this week for Asian Youth Day, making his third international trip as pontiff. He’ll be visiting a country that has experienced considerable religious change in recent decades. Here are six facts about Christianity in South Korea:

1South Korea has no majority religious group. Its population includes a plurality of people with no religious affiliation (46%) and significant shares of Christians (29%) and Buddhists (23%). South Korea’s current president, Park Geun-hye, is an atheist with connections to Buddhism and Catholicism, according to the Council on Foreign Relations. 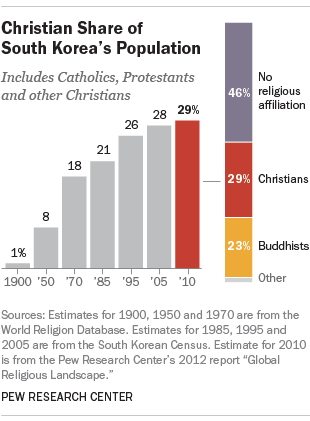 2In 1900, only 1% of the country’s population was Christian, but largely through the efforts of missionaries and churches, Christianity has grown rapidly in South Korea over the past century. In 2010, roughly three-in-ten South Koreans were Christian, including members of the world’s largest Pentecostal church, Yoido Full Gospel Church, in Seoul.

3The majority of Christians in South Korea belong to Protestant denominations, including mainline churches such as Presbyterian, Methodist and Baptist churches as well as various Pentecostal churches. Since the 1980s, however, the share of South Korea’s population belonging to Protestant denominations and churches has remained relatively unchanged at slightly less than 1-in-5. Catholics have grown as a share of the population, from 5% in 1985 to 11% as of 2005, according to the South Korean census. The growth of Catholics has occurred across all age groups, among men and women and across all education levels. 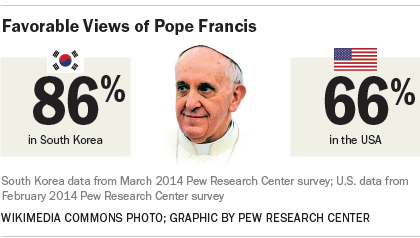 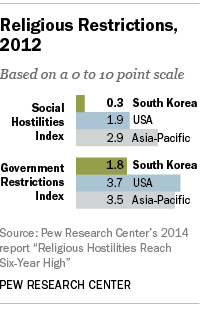