Unrest in Ukraine, Syria and Iraq has prompted renewed attention about refugees across the world in recent weeks. But in the face of such news stories, long-term refugee trends are often overlooked.

According to the 1951 Refugee Convention, refugees flee their home country because of political, ethnic or religious tensions. Although millions of people may move within a country to avoid conflict and violence (they are often described as internally displaced people), people must cross international borders to be counted as refugees. (And although generations of Palestinian refugees are counted as part of the United Nations Relief and Works Agency for Palestinian Refugees in the Near East, Palestinian refugees are not included in estimates by the Office of the United Nations High Commissioner for Refugees.)

Using trend data from the UNHCR for 2002 to 2012, here are five facts – in marking of World Refugee Day on June 20 – that shed light on the changing shape of refugee populations around the world.

1The number of refugees has fallen from its 1990s peak. 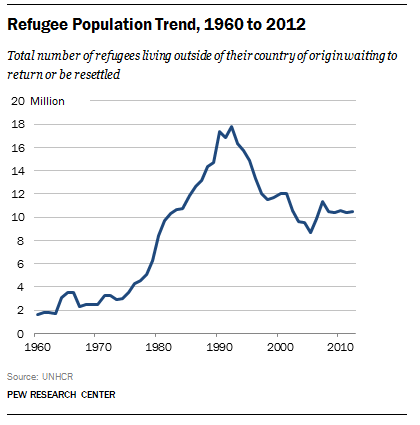 The number of refugees living in a foreign country who are either waiting to return or be resettled peaked in the early 1990s at about 18 million. During the 1990s peak, most of the world’s refugees were leaving Afghanistan, Iraq and other countries in sub-Saharan Africa. In 2012, Afghanistan, Somalia, Iraq and Syria were top countries of origin for refugees. But despite the ongoing conflicts in these countries, the number of refugees around the world is considerably less than it was two decades ago, numbering between 10 million and 12 million in recent years.

2More refugees are from the Middle East.

3Most refugees are from low-income countries.

4Most refugees live in middle-income countries.

5More refugees live in a neighboring country than a decade ago.