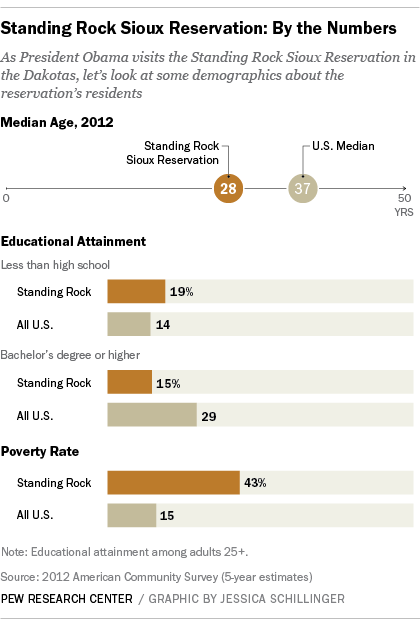 On his visit to the Standing Rock Sioux Tribe in North Dakota today, President Obama is using his first stop at a Native American reservation while in office to highlight the challenges Native Americans face. In an op-ed published in Indian Country Today, Obama called the poverty and high school dropout rates among Native Americans “a moral call to action.”

The poverty rate at Standing Rock Reservation is 43.2%, nearly triple the national average, according to Census Bureau data. The reservation, which straddles North Dakota and South Dakota, has a population of 8,956, according to the Bureau of Indian Affairs.

Native Americans have a higher poverty and unemployment rate when compared with the national average, but the rates are comparable to those of blacks and Hispanics. About one-in-four American Indians and Alaska Natives were living in poverty in 2012. Among those who identify as American Indian or Alaska Native as their only race, the poverty rate was 29.1% in 2012.

Some 5.2 million people (1.7% of the total U.S. population) identify as Native American or Alaska Native, with 44% identifying as at least one other race, according to 2010 Census Bureau data, the most recent data available. And census officials have said that the number of people who self-identify as such has been growing, for reasons they don’t fully understand.

There were 170,110 people nationwide who identified as Sioux in the 2010 census. The largest tribal group, Cherokee, has 819,105 people. Of those who identify as Native American or Alaska Native as their only race, one-in-three (33%) live on reservations or tribal lands. Among all American Indians and Alaska Natives, about one-in-five (22%) live on reservations or tribal lands.