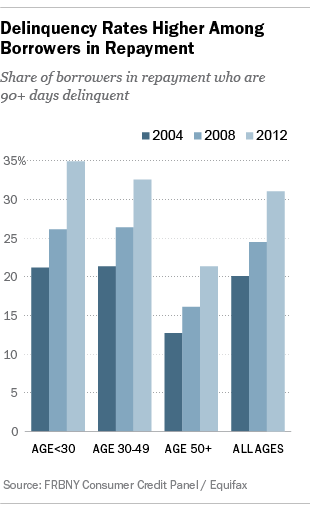 The growing pile of student-loan debt has become a significant burden for millions of Americans, particularly younger people. Not only is the overhang of student debt impeding wealth accumulation among younger adults, as a new Pew Research Center report concludes, but more and more Americans are having trouble paying down their student loans on time.

In 2012, according to analysis by the Federal Reserve Bank of New York, more than 30% of student-loan borrowers who moved into their repayment cycles were delinquent (that is, they’re 90 days or more behind in their payments), up from 20% just eight years earlier. That “effective delinquency rate,” which excludes people who aren’t yet on the hook to start repaying their loans, has risen among all age groups but is highest among borrowers younger than 30: 35% of that subgroup was delinquent in 2012.

As of the end of 2012, only 39% of borrowers were making any progress in reducing their outstanding balances, the Fed economists found. (Comparable figures for previous years weren’t publicly available.) The rest were either delinquent, still in school and thus not yet obligated to make payments, or in a deferral or forbearance program.

It’s worth noting that the job market was a lot stronger in the mid-2000s than it has been since the end of the Great Recession. The rise in delinquencies between 2004 and 2012 likely reflects both an absolute increase in debt loads and the difficulty many new graduates have had in finding work. (The average unemployment rate for 20- to 24-year-olds in 2012 was 13.3%, versus 9.4% in 2004.) 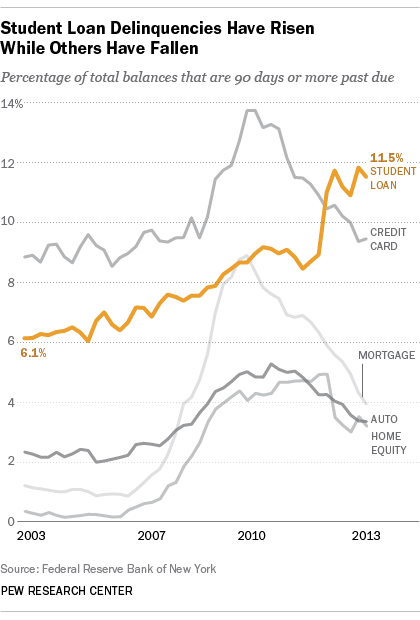 The New York Fed’s economists base these estimates on their analysis of a unique dataset of millions of consumer-credit reports, updated quarterly, but their analysis stops at the end of 2012. More recent data from the same source, though only publicly available in the aggregate, shows that the total balance of student-loan debt reached $1.08 trillion at the end of 2013, up 11.8% (in nominal dollars) from a year earlier.

Student-loan payments can be a significant chunk of young people’s budgets. A 2013 report from the National Center for Education Statistics looked at first-time bachelor’s degree recipients who’d begun repaying their loans one year after graduation, in 1994, 2001 and 2009. That study found that 31% of the 2009 group faced high monthly loan payments (defined as greater than 12% of  monthly income), compared with 22% of the 1994 group and 18% of the 2001 group. (Stagnant wages and the weak labor market may play a role here as well: Median weekly earnings for 20- to 24-year-olds, in constant dollars, fell from $510.79 in 2001 to $464 in 2012.)