On Capitol Hill, some Democratic senators may join with Republicans as early as this week to mandate approval of the Keystone XL pipeline that would carry Canadian oil from Alberta to refineries on the U.S. Gulf Coast. 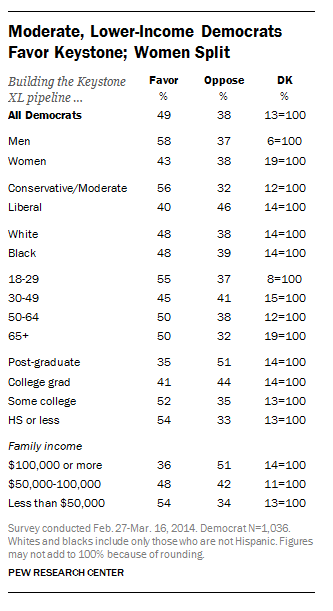 Public backing for building the pipeline is high, with 61% of Americans favoring it in a Pew Research Center poll conducted Feb. 27-March 16. That level of support was about the same as in the previous year.

The issue has put Obama on the spot in the debate between environmentalists warning of the damage it could cause and supporters of the pipeline, who say the pipeline will create thousands of jobs and could provide secure energy resources to the United States. Last month, the Obama administration delayed its decision on whether to approve the project, raising the possibility that a decision on the politically contentious issue could be put off until after the 2014 midterms. Whether the issue is taken up in Congress and how it fares could have an impact on some of the Democratic senators facing tough re-election races.

While Republicans and independents strongly support the pipeline (84% and 61%, respectively), Democrats find themselves divided on whether it should be built.

About half (49%) of Democrats support Keystone compared to 38% who oppose it. Democratic liberals are against its construction by a 46% to 40% margin, while conservative and moderate Democrats back it by 56% to 32%. In addition, highly educated Democrats – as well as those with higher family incomes – are more likely to oppose construction of the pipeline than those with less education and lower incomes.

An ABC News/Washington Post survey conducted at about the same time also found strong support for it with 65% saying it should be approved while 22% opposed it. More than eight-in-ten (85%) of those surveyed said the construction of the pipeline would create jobs, while the public was divided over whether it would pose a risk to the environment (47% said it would, 44% disagreed). But even among the 47% who said there would be environmental risks, 45% said the pipeline should be built anyway.