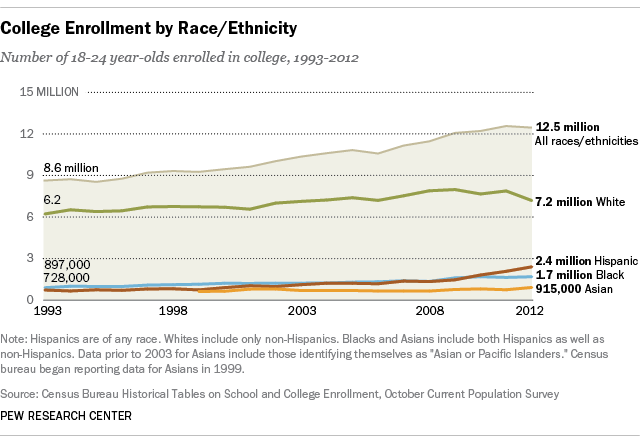 This week, the U.S. Supreme Court upheld a law passed by voters in Michigan that banned the consideration of race in public college admissions decisions. While eight states have passed laws restricting affirmative action since 1996, how has the racial makeup of college students and graduates changed? 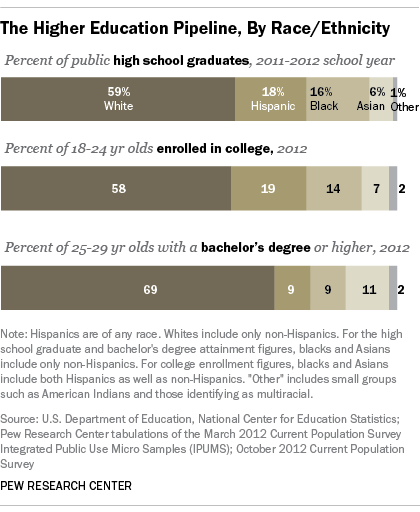 But when looking at data of an older age group with bachelor’s degrees, a gap opens because a smaller share of Hispanics are completing a four-year degree. In 2012, Hispanics accounted for just 9% of young adults (ages 25 to 29) with bachelor’s degrees. This gap is driven, in part, by the fact that Hispanics are less likely than whites to enroll in a four-year college, attend a selective college and enroll full-time.

While Hispanics are the most pronounced demographic story, the education data show different trends for other race and ethnic groups on college campuses. Like Hispanics, blacks are underrepresented among those with bachelor’s degrees. In 2012, blacks made up 14% of college-aged students (ages 18 to 24), yet just 9% of bachelor’s degrees earned by young adults.

By contrast, whites and Asians are overrepresented among young bachelor’s degree holders. Whites make up a smaller proportion of students on campus today than they did 20 years ago, when three out of every four students on a college campus was white. In 2012, whites accounted for 58% of college-aged students, but 69% of young adults with bachelor’s degrees. Like whites, the data show that a high percentage of Asians complete four-year degrees. In 2012, Asians accounted for 7% of college-aged students but 11% of bachelor’s degrees earned.

Americans by a two-to-one margin (63% to 30%) say affirmative action programs designed to increase the number of black and minority students on college campuses are a “good thing,” according to a new Pew Research poll. Blacks and Hispanics overwhelmingly support affirmative action and a majority of whites do, too. (Sample size for Asians is too small to be statistically significant.) Overall, support is nearly unchanged from 2003.