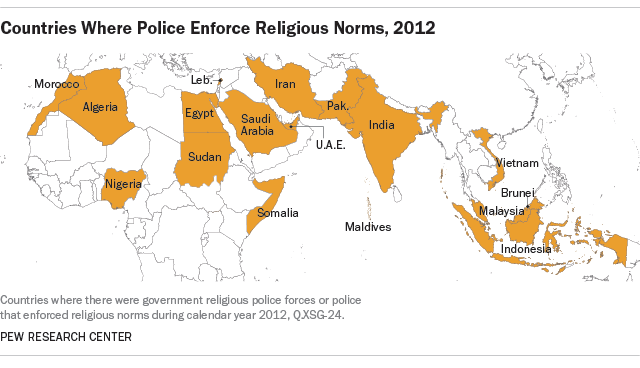 As of 2012, at least 17 nations (9% worldwide) have police that enforce religious norms, according to a new Pew Research analysis of 2012 data. These actions are particularly common in the Middle East and North Africa, where roughly one-third of countries (35%) have police enforcing religious norms.

For example, in Saudi Arabia, where President Obama will meet with King Abdullah later this month, the Muttawa religious police (formally known as the Committee for the Promotion of Virtue and Prevention of Vice) impose a government-approved moral code on residents of the country. The Muttawa enforce strict segregation of the sexes, prohibition of the sale and consumption of alcohol, a ban on women driving and other social restrictions based on the government’s interpretation of Islam.

Earlier this month, Saudi religious police destroyed an ancient burial site in the southern city of al-Baha after claiming the graveyard was un-Islamic. And last month, they conducted anti-Valentine’s Day patrols, monitoring businesses that were selling chocolates, flowers and red or heart-shaped souvenirs.

Saudi Arabia is not alone in its use of a religious police force. In the Asia-Pacific region, police enforcing religious norms are found in eight of 50 countries (16%). In Vietnam, the government’s religious security police continued to monitor “extremist” religious groups, detaining and interrogating suspected Dega Protestants or Ha Mon Catholics. And in Malaysia, state Islamic religious enforcement officers and police carried out raids to enforce sharia law against indecent dress, banned publications, alcohol consumption and khalwat (close proximity to a member of the opposite sex), according to the U.S. State Department.

And in sub-Saharan Africa, two countries in the region (Nigeria and Somalia) have religious police. In Nigeria, the Hisbah (religious police) are funded and supported by governments in several states, where they enforce their interpretation of sharia law.

As of 2012, religious police forces were not present in any country in Europe or the Americas.

The data used in this analysis relied on 18 widely cited, publicly available sources from groups such as the U.S. State Department, the United Nations, Human Rights Watch, Amnesty International and the International Crisis Group. Although it is possible that more countries have religious police forces than are reported by the 18 primary sources, taken together the sources are sufficiently comprehensive to provide a good estimate of the presence of these forces in almost all countries.

Women in many countries face harassment for clothing deemed too religious – or too secular
5 key findings about global restrictions on religion
5 facts about religion in Saudi Arabia
A look at the damage governments inflict on religious property
Key findings: How living arrangements vary by religious affiliation around the world