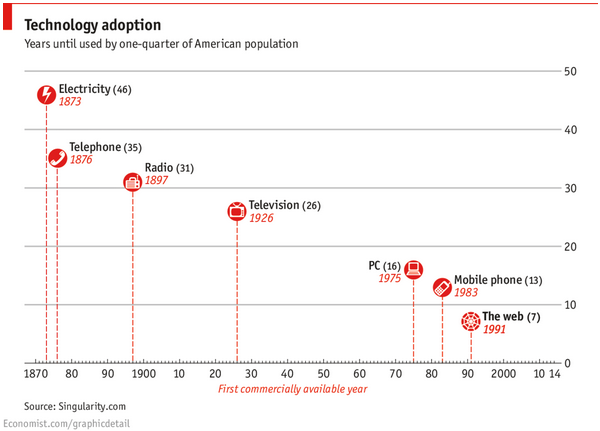 The World Wide Web as we know it was first sketched out a quarter-century ago this week by Tim Berners-Lee, a contractor at the European physics lab CERN. Berners-Lee didn’t actually build out the Web until late 1990, and not until August 1991 did it become publicly available outside CERN.

Since then, of course, the Web has rapidly become so ubiquitous that it’s hard for many to remember how they bought things, did research, watched video or kept up with friends and family before it. If it seems like the Web has gone from “the World Wide What?” to necessity of modern life in record time — well, it has, as the chart above illustrates.

Using data from the website (of course) for futurist Ray Kurzweil’s 2005 book The Singularity is Near, The Economist’s chart not only depicts just how quickly the Web caught on, but also shows a larger trend of ever-more-rapid adoption of new technologies over the past century and a half. Kurzweil argues that the pace will continue accelerating until, sometime around 2045, human and machine intelligence will merge and “the knowledge and skills embedded in our brains will be combined with the vastly greater capacity, speed, and knowledge-sharing ability of our own creations.”

Not everyone, of course, will go as far as Kurzweil, either conceptually or into the future. But when the Pew Research Center asked hundreds of experts about their predictions for digital life in the year 2025, they foresaw the Web — and the internet more broadly — evolving into “a global, immersive, invisible, ambient networked computing environment.” Tapping into that sea of information, they believe, will become as effortless and automatic as flicking on an electric light switch — if not more so.