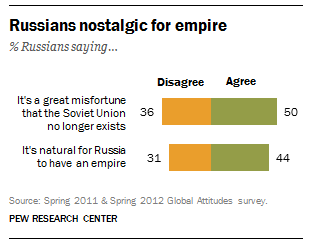 Recent events in Ukraine, including the ouster of the pro-Russian President Viktor F. Yanukovych and moves by Vladimir Putin’s military forces to seize control of the Crimea region, have brought renewed attention to Russia’s historical claims in its former Soviet empire. To that effect, a spring 2012 survey by the Pew Research Center found that 44% of Russians agreed that it is natural for Russia to have an empire. Two decades prior, with the Soviet Union on the verge of collapse, only 37% shared this view.

Thoughts of empire might help explain why in 2011, 20 years after the dissolution of the Soviet Union, half of Russians agreed that it was a great misfortune that the USSR no longer existed. Russians aged 50 and older tended to express more longing for the Soviet era than did those under 50.

However, it is not clear that nostalgia for empire means average Russians are eager to get embroiled in the affairs of neighboring states. For instance, a recent February poll by the Russian Public Opinion Research Center (VCIOM), a prominent public opinion organization based in Moscow, found that 73% of Russians preferred to stay out of the Ukrainian conflict, with only 15% saying Russia should step in to prevent the ouster of then-President Yanukovych.