Washington state Gov. Jay Inslee announced Tuesday that his state will not use the death penalty while he’s in office. In neighboring Oregon, Gov. John Kitzhaber made a similar move in 2011, and last year, Colorado Gov. John Hickenlooper issued an executive order halting an impending execution, and said there was “a legitimate question whether we as a state should be taking lives.”

While a majority of Americans (55%) favor the death penalty for persons convicted of murder, according to a 2013 Pew Research survey, that number has declined significantly over the last two decades. In 1996, about three-quarters of the U.S. public (78%) favored capital punishment. Meanwhile, the share of those saying they oppose the death penalty has risen from 18% in 1996 to 37% in 2013. 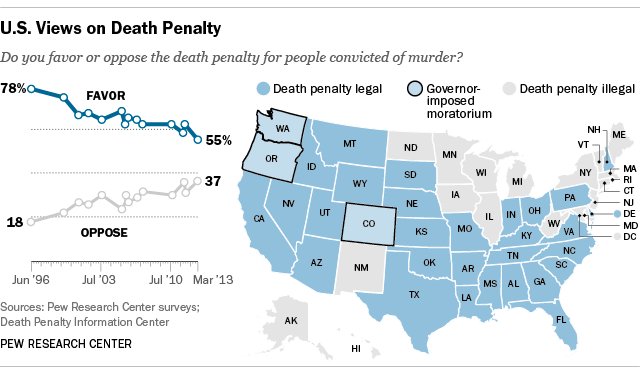 Against this backdrop of public opinion, several states have legally banned the practice in recent years, bringing the total to 18 (plus the District of Columbia). That leaves 32 states where the death penalty is legal. A number of states, including California, North Carolina, Arkansas, Kentucky and Georgia, have de facto moratoriums on the death penalty while state courts weigh lawsuits dealing primarily with execution methods, according to Richard C. Dieter, executive director of the Death Penalty Information Center, a non-profit organization in Washington that collects information on the death penalty.