Coca-Cola’s “It’s Beautiful” ad, that aired during Sunday night’s Super Bowl, sought to portray ethnic diversity in the U.S. by featuring “America the Beautiful” sung in several languages. The many different kinds of people in the ad – Hispanics, cowboys, Muslims, Jews and Asians – were all implicitly united by their identity as “American.”

But not everyone was happy with Coke’s celebration of diversity in the country. After the ad was aired, Twitter lit up with commentary  under various hashtags (such as #SpeakAmerican) critical of the company. Some commenters found it disrespectful to sing “America the Beautiful” in any language other than English, while others said immigrants need to learn English to live in the United States. 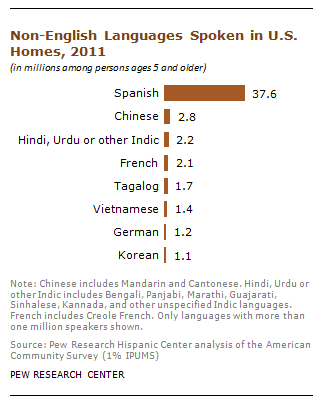 The eight languages shown in the accompanying chart account for 83% of those Americans who speak a language other than English at home. In all,  there are 381 languages spoken in the U.S. that are counted by the Census Bureau, and detailed information is available for 106 of them.