The world’s biggest challenge in 2014? Rising societal tensions in the Middle East and North Africa, followed by widening income disparities and persistent structural unemployment, according to the annual Survey on the Global Agenda conducted by the World Economic Forum.

The WEF, which opened its annual meeting in Davos, Switzerland, on Wednesday, surveyed nearly 1,600 businesspeople, academics, government officials, nonprofit leaders and others to come up with its ranking. Nearly eight-in-ten respondents were from Europe (31%), North America (27%) or Asia (20%); 70% were male, and nearly half (47%) were ages 40 to 59. (We provided an overview of the survey results back in November.) 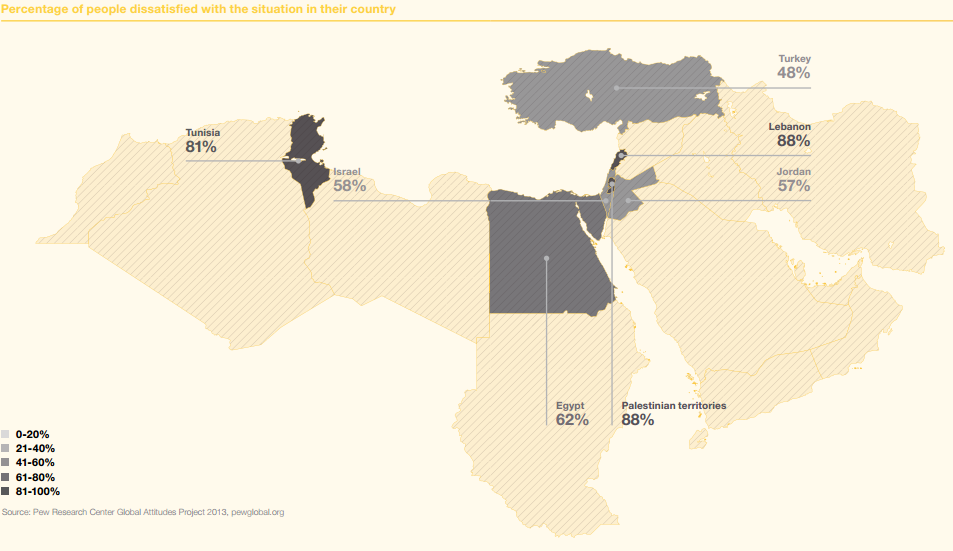 The survey identified and ranked trends on a 1-to-5 scale, with 1 indicating “not significant at all” and 5 indicating “extremely significant”. Rising tensions in the Middle East/North Africa came in at 4.07; it was the highest-ranking challenge among respondents from Europe, North American and the Middle East/North African region itself. 45% of respondents cited political instability as the region’s most pressing challenge, while 27% cited unemployment.

The report added that, while the most visible split in the region is “between those who want political Islam to play a role in public life, and others who want to keep religion and government separate, [w]e also see a trend of rising sectarian tensions within communities.” A recent Pew Research Center report found that, from 2011 to 2012, the Middle East/North African region had the sharpest increase in social hostilities involving religion.

“The lack of trust among competing parties, an atmosphere of intolerance in the public arena and, more generally, the failure to put inherently fragile transitions on a stable path, are all to blame for the increased tensions,” the Global Agenda report stated. “There is a battle of ideas taking place within the Arab world, and it is polarizing a region whose long-term outlook remains uncertain.”