Nearly six-in-ten Americans (58%) say they’re “especially looking forward” to the Winter Olympics next month, including roughly equal shares of each age group. But when it comes to this year’s other quadrennial international sports event – the World Cup – it’s largely young people who are anticipating it. 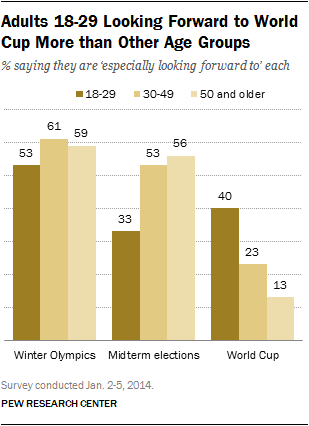 Roughly the same share of the public is looking forward to the World Cup this year (22%) as it was in 2010 (23%), when young people were also the most likely to express anticipation. 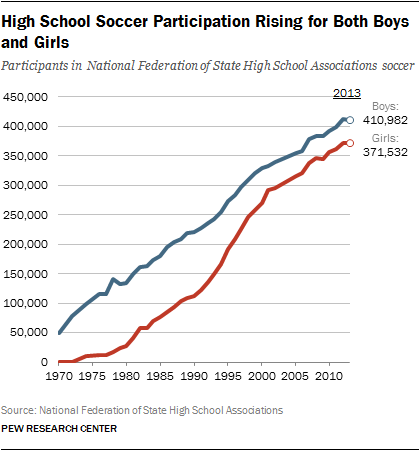 Participation at a high school level has soared in recent years, as well. More than 370,000 girls and 410,000 boys play on sports teams governed by the National Federation of State High School Associations. It is now the fourth-most popular sport for high school girls and fifth-most popular one for boys.

This year’s TV ratings will shed light on whether anticipation turns into action. More than 111 million Americans watched at least six minutes of the 2010 World Cup, a 22% increase since 2006, according to Nielsen. By comparison, 190 million Americans watched at least some coverage of the 2010 Vancouver Games, according to NBC.