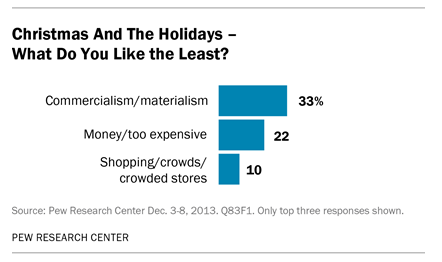 A new Pew Research Center survey asked respondents an open-ended question (with multiple responses accepted): What do you like the least about Christmas or the holiday season?

The three top responses all involve shopping or money: a third of Americans (33%) say they dislike the commercialism or materialism of the holidays; roughly one-in-five (22%) cite the high expenses of the season or the expectation of buying gifts; and one-in-ten (10%) mention shopping or crowded stores.

Nevertheless, the overwhelming majority of the public (86%) plan to buy gifts this year. Americans may be spending somewhat less on Christmas gifts than in previous years, but they’re still forking over a considerable amount. Americans will spend an average of $740 this year on the holiday, down from $770 last year, according to a Gallup poll. (The figure declined sharply in the midst of the recession, falling from $866 in 2007 to $616 in 2008; it has since rebounded somewhat, but not to pre-recession peaks.) 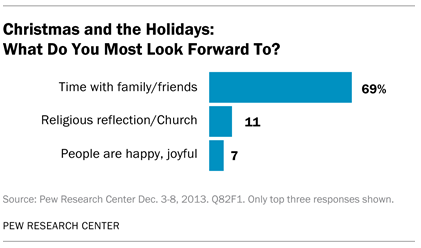