President Obama continues to have sky-high job ratings among liberal Democrats — 90% approve and just 8% disapprove in Pew Research’s poll earlier this month. Their approval of his job performance is twice the rating given by the public as a whole (which rose slightly to 45% after steadily declining over six months). 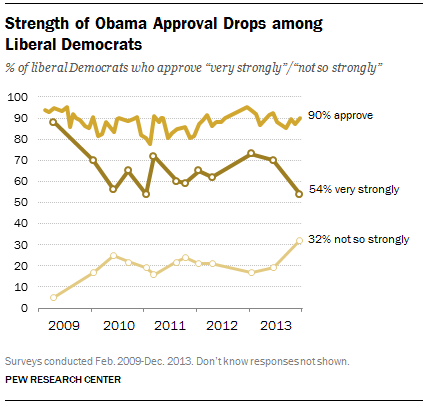 Although 90% approval among liberal Democrats is historically a solid showing for Obama, the 54% share who strongly approve is tied for worst among the 13 times over his presidency that Pew Research has asked about approval strength. This June, the most recent time we had asked about approval strength, 73% of liberal Democrats strongly approved of Obama and 17% approved not so strongly of his job. 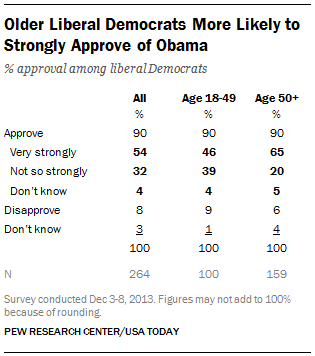 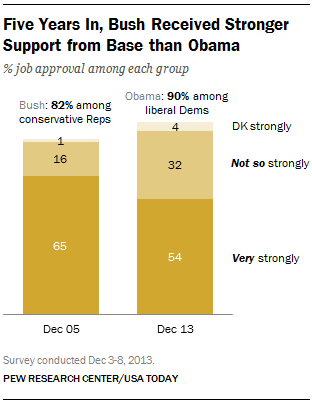 Compared with Obama after five years in office, George W. Bush had a lower level of approval among his base – but more of them strongly approved. In December 2005, 82% of conservative Republicans approved of Bush while 65% said they strongly approved. In fact, Bush continued to have the support of 8-in-10 conservative Republicans into 2006 and 2007 and retained strong approval among 6-in-10. (See Bush’s five-year trend at the bottom of the post.)

Among each one’s base, neither Obama nor Bush had quite the combination of overall and strong support as their predecessor Bill Clinton at a similar point. In the midst of the Monica Lewinsky scandal in September 1998, Clinton captured the same level of approval as Obama among liberal Democrats (91%) and 70% of Clinton’s base strongly approved of his job. 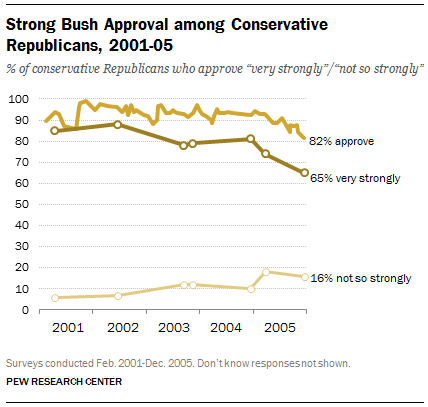