U.S. political leaders have long spoken of America’s democracy as pivotal to its role in the world, whether it was Woodrow Wilson declaring in 1917 that the U.S. must enter World War I to make the world “safe for democracy,” or George W. Bush saying, on his re-election in 2004, that “It is the policy of the United States to seek and support the growth of democratic movements and institutions in every nation and culture.” 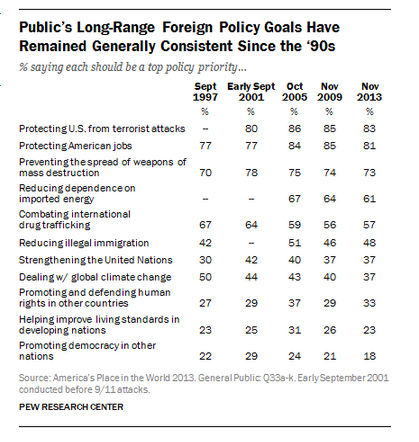 But promoting democracy in other nations in recent decades has not  been a top priority for the American public. A new Pew Research Center survey on “America’s Place in the World” found that just 18% of those surveyed cited this as a top foreign policy objective, putting it at the bottom of a list of priorities. Since 1993, the share of Americans saying promotion of democracy was a top priority has never topped 29%.

Just under three-in-ten (27%) Democrats saw promoting democracy abroad as a priority, with much less support coming from Republicans (16%) and independents (13%).

For the 11 priorities tested, those surveyed were asked whether each long-range foreign policy goal should be a “top priority,” “some priority” or “no priority at all.”

This sentiment has become particularly pointed when it comes to the situation in the Middle East and North Africa after the Arab Spring uprisings beginning in 2010 against authoritarian regimes gave way to turmoil in many of the affected countries.

A survey conducted in Oct. 2012 pointed to the disillusion that had set in. Those believing the Arab Spring would lead to lasting improvements dropped from 42% in April 2011 to 25%, and along with that change, the U.S. public began putting less importance on democracy in the region than in having stable governments. That view is even more pronounced in the latest survey than it was last year: 63% now put more importance on stable governments while 28% see democracy as a priority.

Americans’ foreign policy priorities for 2014
How America’s opinion of China has changed since Tiananmen
While focus on foreign problems lessens, U.S. public keeps its eye on China
How Americans see their country and their democracy
In foreign affairs, Americans are less receptive to moral arguments
Defining generations: Where Millennials end and Generation Z begins
Nearly Half Expect To Have Difficulties Voting in 2020 Election
About One-in-Four U.S. Hispanics Have Heard of Latinx, but Just 3% Use It
Black voter turnout fell in 2016, even as a record number of Americans cast ballots
An examination of the 2016 electorate, based on validated voters