Fifty years ago today, President John F. Kennedy was shot while riding in a motorcade through downtown Dallas. While news from the event rippled across America, it also seared into the American psyche. Today, virtually all Americans old enough to remember Nov. 22, 1963, still remember it vividly. 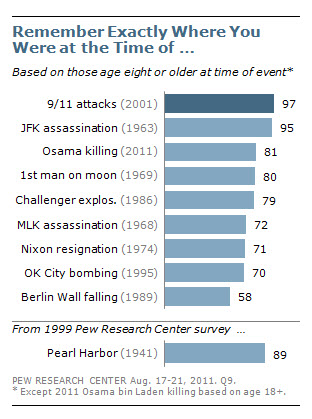 According to a September 2011 Pew Research survey, 95% of Americans born in 1955 or earlier said they could recall exactly where they were or what they were doing when Kennedy was killed. That compares with 81% of adults asked in 2011 who remember those details when Osama bin Laden was killed in 2011, and 72% when Martin Luther King, Jr. was killed in 1968, according to the same survey. The only other event that weighed on American consciousness to such an extent was the 9/11 terrorist attacks (97%). (Survey questions were filtered to people who were at least eight years of age at the time of each historical event.)

Yet, while memories of JFK’s assassination tend to linger in individuals, the number of people bearing those memories is inevitably declining. As of July 2012, 90.63 million people in the U.S. – or 28.9% of the total population – were of an age in 1963 to be able to retrieve a personal memory. (According to development psychologists, the typical age from which an adult can retrieve a personal memory is between 3 and 4 years old.)

JFK stands out among presidents, in part because he was a cultural phenomenon in his time and because he remains popular today. Asked how Kennedy will go down in history, 74% of Americans today said Kennedy will be remembered as an outstanding or above average president, the highest rating among the 11 most recent presidents.