Each year, millions of Shia pilgrims visit the shrine of one of their most revered figures – Hussein, the Prophet Muhammad’s grandson – to mourn the anniversary of Hussein’s death on the Day of Ashura, which falls today. While Ashura is sacred for all Muslims, it is especially important to Shias, illustrating some of the differences between Shia and Sunni Muslims. 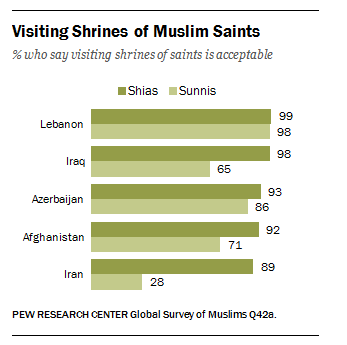 Hussein was killed in a battle over the succession of the caliph, or leader of the Muslim community, the conflict at the heart of the schism between Sunnis and Shias, and Ashura has often been an occasion for sectarian tensions. In recent years, attacks on Shia processions and gatherings marking Ashura have been frequent – especially in Iraq, the modern-day location of Hussein’s death in the Battle of Karbala. This year is no exception.

A Pew Research Center survey finds that, while the world’s Sunnis and Shias share many similarities, there are significant divides between the groups on certain religious practices.

When asked whether it is acceptable in Islam to visit shrines of Muslim saints, Iraqi Muslims are split along sectarian lines, with Shias nearly unanimous in their approval (98%), compared with roughly two-thirds of Sunnis (65%) who say it is acceptable.

Likewise, in neighboring Iran, the vast majority of Iranian Shias (89%) say it is acceptable to visit shrines of saints, but only 28% of Sunnis agree. In some countries with very few Shias, Sunni Muslims are even less accepting of such practices: as few as 4% of Egyptian Sunnis and 3% of Jordanian Sunnis say visiting shrines is permissible.

However, the polls found that Sunnis and Shias in Afghanistan, Azerbaijan, Iran, Iraq and Lebanon are united by their belief in key tenets of Islam, with near universal belief in God and the Prophet Muhammad. Levels of religious practice vary more by country than by sect, with Sunnis and Shias who live side-by-side largely mirroring each other in their rates of fasting and daily prayer.

Topics
Beliefs & PracticesInterreligious RelationsIslamMuslims Around the World
Share this link: