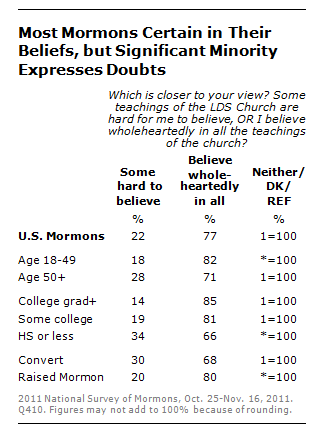 A top Mormon leader made headlines this week when he acknowledged, without being specific, that past actions by church leaders may have contributed to doubts about church teachings.

Indeed, one-in-five Mormons surveyed in 2011 said they have such doubts.

“In nearly 200 years of church history – along with an uninterrupted line of inspired, honorable and divine events – there have been some things said and done that could cause people to question” church history and beliefs, said Dieter F. Uchtdorf , who is one of the three men who make up the highest governing body of the Church of Jesus Christ of Latter-day Saints.

Uchtdorf was speaking to 20,000 Mormons who had assembled for the church’s semiannual general conference in Salt Lake City.

A 2011 survey of American Mormons by the Pew Research Center found that three-in-four (77%) people who are current members of the LDS Church say they believe wholeheartedly in all the teachings of Mormonism. But 22% say they find some of the church’s teachings hard to believe. 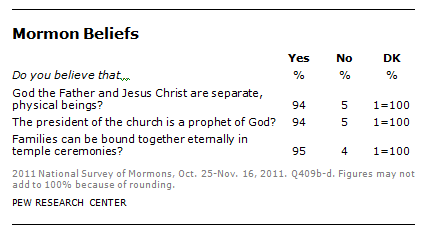 There are a number of tenets that are central to the teachings of the LDS church and widely-held by Mormons that are not shared by other Christian traditions. Nine-in-ten Mormons believe the president of the LDS Church is a prophet of God (94%) and that the Book of Mormon was written by ancient prophets and then translated by church founder Joseph Smith (91%). Similarly large numbers of Mormons believe that families can be bound together eternally in temple ceremonies (95%) and that God the Father and Jesus Christ are separate, physical beings (94%).

In the Pew Research Center’s Religious Landscape Survey, conducted in 2007 and released in 2008, 70% of Mormons who were brought up in the church said they were still church members, while about 30% said they had either converted to another religion (15%) or were no longer affiliated with a particular religion (14%).