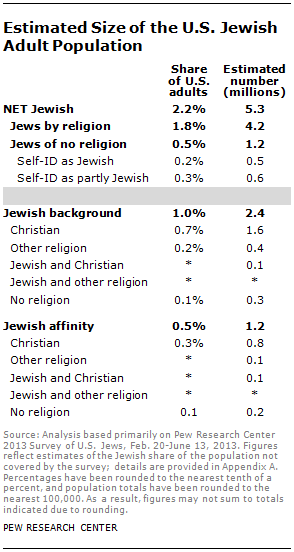 The question of how many Jewish Americans there are does not have a simple answer. That’s because the number of Jews in the U.S. depends on how one defines a Jew, as explained in the Pew Research Center’s major new survey of Jewish Americans.

There are about 4.2 million American adults who say they are Jewish by religion, representing 1.8% of the U.S. adult population. But there are roughly 5.3 million Jews (2.2% of the adult population) if the total also includes “Jews of no religion,” a group of people who say they are atheist, agnostic or “nothing in particular” when asked about their religion but who were raised Jewish or have a Jewish parent and who still consider themselves Jewish aside from religion. This is the net Jewish population as defined by the Pew Research report.

Two other groups were not counted as Jews in the report. There are an additional 2.4 million adults in the “Jewish background” category – that is, people who were raised Jewish or had at least one Jewish parent, but who now either identify with a religion other than Judaism (most are Christian) or say they do not think of themselves as Jewish or partially Jewish, by religion or otherwise. Also, there are 1.2 million adults in the “Jewish affinity” category – people who were not raised Jewish, do not have a Jewish parent, and are not Jewish by religion but who nevertheless consider themselves Jewish in some sense.

About 9 million people (3.8% of the U.S. adult population) fit into one of the above categories. (To explore the many possibilities, Pew Research created an interactive tool to estimate the Jewish population based on different possible definitions.)

It is difficult to track how the size of the Jewish population has changed over time, but surveys in the 1950s and 1960s consistently found that between 3% and 4% of American adults said their religion was Jewish.

Jewish essentials: For most American Jews, ancestry and culture matter more than religion

A Portrait of Jewish Americans