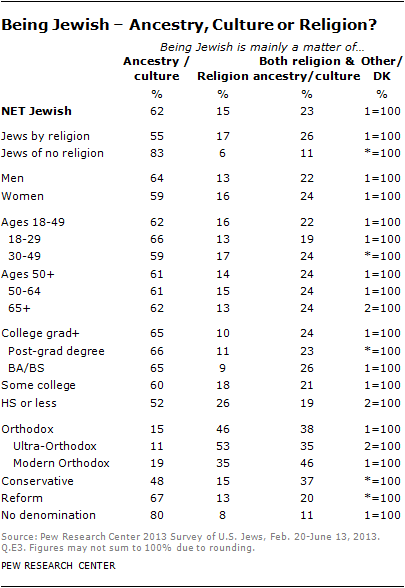 What does it mean to be Jewish? There are few more fundamental and difficult questions for Jews — indeed, figuring out one’s place within Judaism’s 3,000+ years of tradition, 620 commandments (plus a library’s worth of commentary), worldwide diaspora and multiple religious movements is itself key to many Jews’ self-identity.

Jews tend to be less religious than the U.S. public as a whole, with fewer saying they attend religious services weekly, believe in God with absolute certainty, or that religion is very important in their lives. The Pew Research Center’s landmark new survey of American Jews found that overall, about six-in-ten (62%) say being Jewish is mainly a matter of ancestry and/or culture, while just 15% say it’s mainly a matter of religion. (The rest cited some combination of religion, ancestry and/or culture.)

Those views varied considerably by religious movement, or lack thereof: While fully two-thirds of Reform Jews (and 80% of Jews who didn’t identify with any movement) say being Jewish is mainly a matter of ancestry and/or culture, only 15% of Orthodox Jews do. Nearly half (46%) of Orthodox Jews say being Jewish is mainly a matter of religion, while more than a third (38%) cite religion in combination with ancestry and/or culture. (In general, Orthodox Jews are the strictest about observing traditional Jewish law and Reform Jews are the least strict, with Conservative Jews in between.) 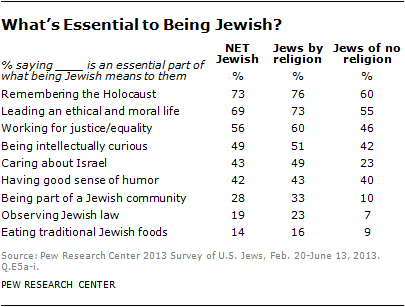 When we asked Jews about what is and is not essential to their own sense of Jewishness, 73% say remembering the Holocaust is essential (including 76% of Jews by religion and 60% of Jews of no religion). Almost as many Jews, 69%, say leading an ethical and moral life is essential, and 56% cite working for social justice and equality; only 19% say observing Jewish law is essential. 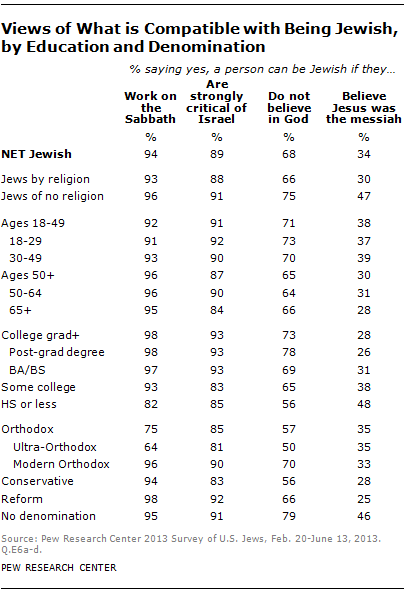 In general, Jews express fairly broad views of what is and isn’t compatible with being Jewish — majorities across all age and educational subgroups and in all major religious groupings say people can be Jewish if they work on the Sabbath, are strongly critical of Israel and even if they don’t believe in God.

The only clear no-no, though, is believing Jesus was the Messiah, which clear majorities of most subgroups say is incompatible with being Jewish; even so, about a third (34%) of Jews say a person can be Jewish even if he or she believes Jesus was the Messiah. (Our researchers didn’t include so-called “Messianic Jews,” as part of the main survey population; they were considered people of Jewish background or Jewish affinity.)

A Portrait of Jewish Americans