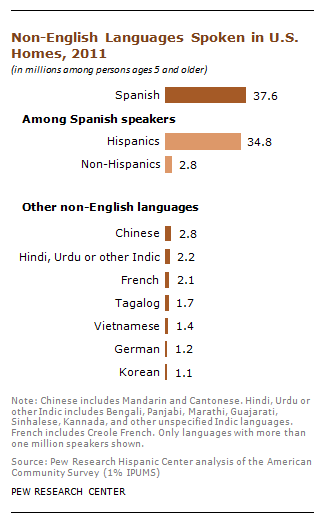 A record 37.6 million persons ages 5 years and older speak Spanish at home, according to an analysis of the 2011 American Community Survey by the Pew Research Center.

The number of Spanish speakers in the U.S. has grown rapidly in recent decades, reflecting the arrival of new immigrants from Latin America and growth in the nation’s Hispanic population. Today 34.8 million Hispanics ages 5 and older speak Spanish at home.

However, not all Spanish speakers are Hispanic. According to our analysis, some 2.8 million non-Hispanics speak Spanish at home today. That places Spanish at the top of the list of non-English languages spoken by non-Hispanics along with Chinese and ahead of all other languages.

(The U.S. Census Bureau measure of non-English language use captures how many people say a language other than English is spoken in the home but does not capture how well or how often the language is spoken).

Nine-in-ten (89%) of non-Hispanic Spanish speakers were born in the U.S., a share similar to that for all non-Hispanics ages 5 and older (91%).