Americans’ views on abortion have remained relatively steady in recent years. But 40 years after Roe v. Wade, the legal battles over abortion are far from over. In fact, there has been a substantial amount of activity at the state level, particularly in parts of the Southern and Midwestern U.S., where, according to a July Pew Research Center poll, there is greater opposition to abortion rights among the general public. 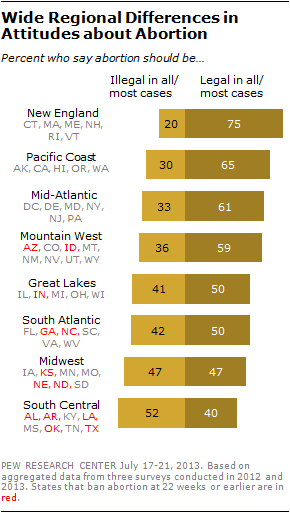 In 2013 alone, state legislatures have enacted more than 40 new provisions aimed at restricting abortion access, according to the Guttmacher Institute. For instance, seven states this year – including North Carolina this week – have enacted laws imposing new medical requirements on abortion clinics. But while abortion opponents have been winning legislative battles, abortion-rights supporters have been pushing back, with some success, in court.

This year, abortion-rights groups have responded to new state laws with lawsuits challenging the new restrictions. In many cases, judges have issued injunctions against or struck down the new statutes. In North Dakota, for instance, a federal judge issued an injunction against a recently enacted law that would have prohibited most abortions after a fetal heartbeat could be detected (as early as six weeks).  And in Wisconsin, a federal court issued an injunction against a new state law that would have required doctors working in abortion clinics to have admitting privileges at a local hospital. Another admitting-privileges requirement enacted in Alabama recently was halted by a federal judge.

The next big legal battle could be in Texas, where Republican Gov. Rick Perry recently signed a new law banning most abortions after 20 weeks and imposing new medical requirements on abortion clinics that may cause many of them to close. Another potential battleground is North Carolina, where Republican Gov. Pat McCrory on Monday signed into law a measure that also imposes new requirements on clinics. Abortion-rights advocates have said they are considering bringing legal action against both new laws.

But while legal battles in Texas and North Carolina likely would garner a lot of attention, state-level lawsuits could soon be overshadowed by the U.S. Supreme Court. In June, the high court indicated it might review a 2012 Supreme Court of Oklahoma decision that struck down a law restricting the use of abortion-inducing drugs. The justices have asked Oklahoma’s highest court for more information and, once they receive answers to their questions, they will decide whether to take the case, Cline v. Oklahoma Coalition for Reproductive Justice. If the U.S. Supreme Court does end up taking the Cline case (probably in 2014), it would be the high court’s first major abortion ruling since 2007, when it upheld a federal ban on partial-birth abortion.

Just over half of Americans (54% in a July 2013 Pew Research poll) support keeping abortion legal in all or most cases. And nearly two-thirds oppose overturning Roe v. Wade, the landmark Supreme Court decision guaranteeing a right to abortion at least during the first three months of pregnancy, according to a January 2013 Pew Research poll.

At the same time, most Americans are less supportive of legalized abortion later in pregnancy. A December 2012 USA Today/Gallup survey found that majorities say that abortion should be illegal during the second (64%) and third (80%) trimesters of pregnancy.

After political and legal battle in Texas, a state-by-state fight over abortion still ahead
As Texas considers new abortion restrictions, polls show complex debate
5 facts about the abortion debate in America
Do state laws on abortion reflect public opinion?
Where the public stands on key issues that could come before the Supreme Court
Defining generations: Where Millennials end and Generation Z begins
How the Coronavirus Outbreak Has – and Hasn’t – Changed the Way Americans Work
What We Know About Gen Z So Far
Broad agreement in U.S. – even among partisans – on which news outlets are part of the ‘mainstream media’
Quiz: Are you a Core Conservative? A Solid Liberal? Or somewhere in between?