In recent years, Pew Research surveys have found evidence of a gradual decline in religious commitment in the U.S. public as a whole. For example, there has been a modest uptick over the past decade in the share of U.S. adults who say they seldom or never attend religious services.

The number of Americans who do not identify with any religion also has grown in recent years; indeed, about one-fifth of the public overall – and a third of adults under age 30 – are religiously unaffiliated as of 2012. Fully a third of U.S. adults say they do not consider themselves a “religious person.” And two-thirds of Americans – affiliated and unaffiliated alike – say religion is losing its influence in Americans’ lives.

A survey conducted March 21 – April 8 asked Americans whether having “more people who are not religious” is a good thing, a bad thing, or doesn’t matter for American society. Many more say it is bad than good (48% versus 11%). But about four-in-ten (39%) say it does not make much difference. Even among adults who do not identify with any religion, only about a quarter (24%) say the trend is good, while nearly as many say it is bad (19%); a majority (55%) of the unaffiliated say it does not make much difference for society. Read more 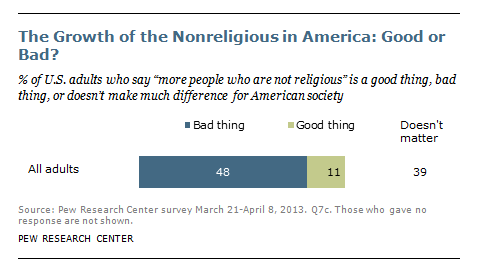