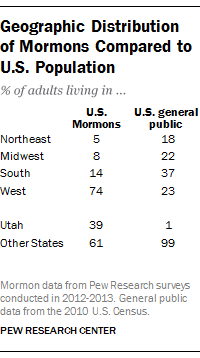 Today is Pioneer Day, an annual state holiday in Utah that the Mormon Church calls “a celebration of the courage of Mormon pioneers who made the historic trek to Salt Lake City in 1847.” The group was fleeing persecution it had faced in Illinois and elsewhere.

More than a century and a half later, the vast majority of American Mormons remain in the Western United States. Pew Research Center surveys from 2012 and 2013 show that 74% of U.S. Mormons live in the West, including nearly four-in-ten (39%) who reside in Utah, which is home to roughly 1% of the overall U.S. population.

About 2% of American adults identify as Mormons. Many of them still feel somewhat misunderstood by their compatriots, with 62% saying in a 2011 survey that Americans know little or nothing about Mormonism. In addition, two-thirds of Mormons (68%) say that the public as a whole does not see Mormonism as part of mainstream American society.

At the same time, a clear majority of Mormons (63%) say acceptance of Mormonism in the U.S. is rising. Only 5% say it is falling, while about three-in-ten (29%) say it is not changing.