It’s one thing to talk about voting blocs on the Supreme Court — four conservative justices, four moderate-to-liberal ones and Anthony Kennedy in between, swinging back and forth like a pendulum. It’s another to see the actual voting patterns at work.

The fine folks at SCOTUSblog, in their end-of-term Stat Pack, have charted how often each justice agreed or disagreed with his or her colleagues in the 78 cases decided by the Court in its just-ended term. This chart, which looks just at the 23 5-4 decisions, clearly shows how the justices align with, or against, each other on the most contentious cases: 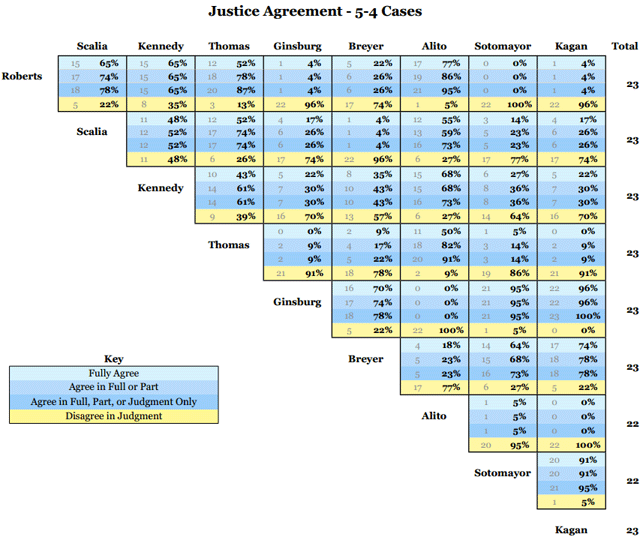 As the chart shows, Justices Ginsberg and Kagan not only agreed with each other in every 5-4 case, but both also disagreed with Justice Alito on every single one. Chief Justice Roberts and Justice Sotomayor also found themselves on opposite sides of every 5-4 decision. It also shows that Kennedy, the Court’s acknowledged “swing vote,” was more likely to agree with the Court’s four most conservative justices (ranging from 52% to 73% agreement in the 5-4 decisions) than the moderate-to-liberal ones (30% to 43%).

Want to suggest a future Chart of the Week? Tweet us.