The Supreme Court today struck down the federal Defense of Marriage Act (DOMA), saying in a 5-4 ruling that the federal government can’t disparage marriages recognized by the states.

The Court also declined to rule on the constitutionality of California’s Proposition 8, a 2008 ballot measure that amended the state constitution to ban same-sex marriage.

The two rulings come as laws and public attitudes on same-sex marriage are changing rapidly — even since the Court accepted the cases for review in December. 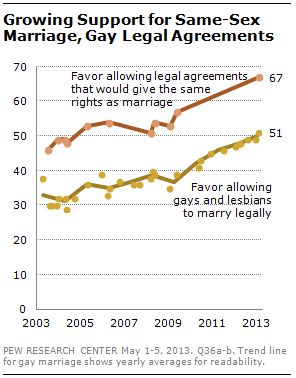 A Pew Research Center survey in May found that for the first time, more than half (51%) of Americans favored allowing gay men and lesbians to marry. The same survey found that 72% percent of Americans believe that legal recognition of same-sex marriage is inevitable, regardless of whether they themselves favor or oppose it: While 85% of same-sex marriage supporters say legal recognition is inevitable, so do 59% of opponents.

As the chart on the right  (as well as this animated chart) shows, support for same-sex marriage has been trending steadily upward in recent years. As recently as 2009, only 37% of Americans told Pew Research that they supported same-sex marriage, while 54% opposed it. Since then, eight states and the District of Columbia have legalized same-sex marriage, bringing the total number of states where it is (or soon will be) allowed to 12 (as shown on this interactive map).

News coverage in recent months has contributed to that sense of momentum, a Pew Research analysis found, with stories containing more statements supporting same-sex marriage outnumbering those with more statements opposing it by a margin of roughly 5-to-1.

However, every other state except New Jersey and New Mexico (whose laws are silent on the issue) have statutory and constitutional bans on same-sex marriage. California, via Proposition 8, was the only state to ban same-sex marriage after briefly legalizing it.

In a 5-4 decision written by Chief Justice Roberts, the Court said the parties who appealed a lower court decision overturning Proposition 8 had no legal standing to do so. That means the prior decision stands.

When New York state, where the DOMA case originated, decided to legalize same-sex marriage and recognize those performed elsewhere, Kennedy wrote, it was “a far-reaching legal acknowledgment of the intimate relationship between two people, a relationship deemed by the State worthy of dignity in the community equal with all other marriages. But, he continued, “DOMA seeks to injure the very class New York seeks to protect. By doing so it violates basic due process and equal protection principles.”

The Pew Forum on Religion & Public Life will have a full analysis of today’s rulings soon. In the meantime, click here for our analysis from earlier this year.