NASA introduced eight new astronauts earlier this week—the agency’s first in four years—who could be part of the first human missions to land on an asteroid in the 2020s and then on Mars in the following decade. And a Pew Research survey indicates that these exploration goals are consistent with the predictions of most Americans. In 2010, a majority of Americans (63%) were optimistic that astronauts would land on Mars by 2050. 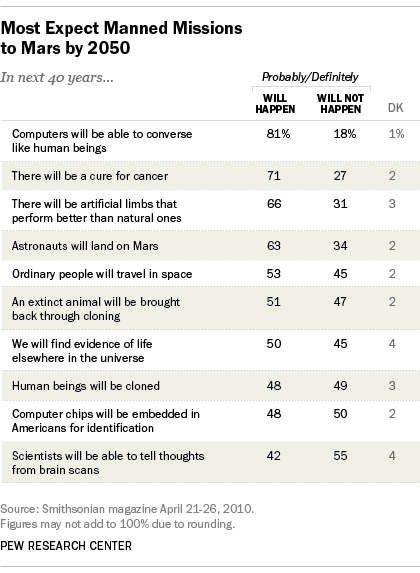 The space agency’s bold announcement came on the eve of both the 30th anniversary of Sally Ride’s historic flight into space and the 85th anniversary of Amelia Earhart’s first flight across the Atlantic Ocean.

The survey also found that half of Americans believed ordinary people would travel in space (53%) and evidence of life would be found elsewhere in the universe (50%) by 2050.

When asked about the likelihood of an asteroid hitting Earth before 2050, Americans were consistently not worried. Fewer than one-third (31%) of Americans—the same percentage as in 1999—said that it would definitely or probably happen.

But NASA is taking the threat more seriously. On Tuesday, officials announced a “Grand Challenge” focused on identifying all asteroid threats to Earth and figuring out how to deal with them. Read more