In testimony before the House Intelligence Committee on Tuesday, the head of the National Security Agency, Gen. Keith Alexander, said the government surveillance programs which have set off a national debate had helped prevent more than 50 terrorist “events” since Sept. 11, 2001. 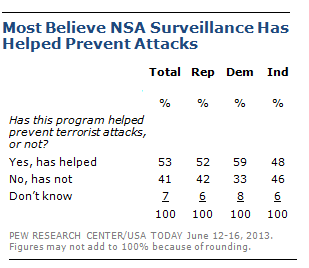 Many Americans appear to accept that defense of the program as true, according to a survey conducted just days before the hearing. A majority (53%) think the government’s collection of telephone and internet data has helped prevent terrorist attacks, while 41% say it has not.

But while a majority agree the program has helped prevent terrorist attacks, the public is still split on its view of the surveillance programs: 48% approve of the collection of data and 47% do not.

In addition, Americans are divided over when the information that former government contractor Edward Snowden leaked about the surveillance efforts served or harmed the public interest. Just under half (49%) said the leaks served the public interest while 44 % said they harmed it. Read more

Americans feel the tensions between privacy and security concerns

Global opinion varies widely on use of torture against suspected terrorists

What Americans think about NSA surveillance, national security and privacy

Most Americans see terrorism as part of life in the future