Allegations that Syria has used chemical weapons against anti-government forces have prompted at least a few more Americans to pay close attention to the long-running conflict. 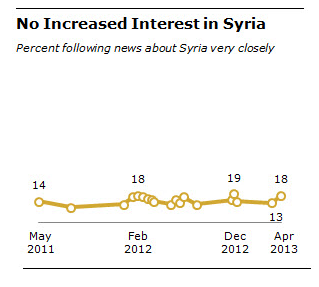 Though the chemical weapons charges have prompted increased calls for the United States and its allies to take military action against the Syrian regime, most Americans are paying little or no attention to the story. In the most recent Pew Research Center survey, 23 percent of respondents had no opinion on the possible use of military force in Syria.

Other recent news events have attracted far more public attention, from the ongoing investigation into the Boston Marathon bombings (which 63%  said they had followed very closely) to the gun-control debate in Congress (39%) and the explosion of a Texas fertilizer plant (27%). Read more 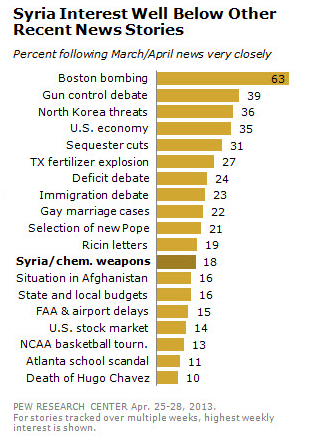 As U.S. considers Syrian strike, support for NATO has waned

Even before chemical weapons furor, Assad had little support among publics in the region

U.S. aid to Syrian rebels: Public has opposed American involvement in the past