Our survey in March found that 62% of white evangelical Protestants said there should be a way for immigrants who are currently in the U.S. illegally and who meet certain requirements to stay in the country. Four-in-ten backed a path to citizenship while 24% said preferred conferring permanent residency.

However, support among white Evangelicals for allowing unauthorized immigrants to stay in the U.S. legally is lower than that of the overall public (71%) and other religious groups.

When it comes to perceptions of immigrants in general, 55% of white evangelicals believe immigrants are a burden because they take jobs, housing and health care away from current residents?, while about as many (58%) say they threaten traditional American customs and values. That compares to the overall U.S. public where, by a 49% to 41% margin, immigrants are seen as a strength to the country. The public at large also believes, by 52% to 43%, that the growing number of immigrants strengthens U.S. society rather than threatens its values. Read More 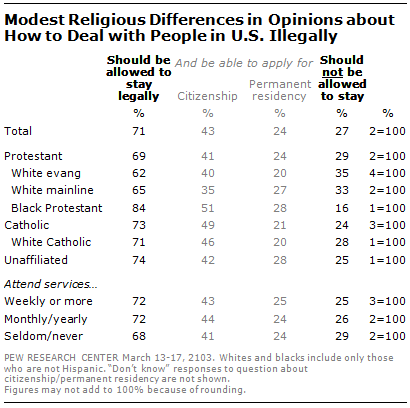 Unauthorized Immigrants: Who they are and what the public thinks
Catholic leaders urge immigration reform
Americans broadly support legal status for immigrants brought to the U.S. illegally as children
Catholics, especially Hispanics, echo pope’s call to embrace immigrants
White evangelicals among groups with slipping confidence in Trump’s handling of COVID-19