A recent Pew Research Center survey found that 71% of Americans say there should be a way for people in the United States illegally to remain in this country if they meet certain requirements. The survey also found that overall attitudes about immigrants in the U.S. are more positive than negative, despite the nation’s struggling economy.

However, there are partisan differences in views of immigrants. While most Democrats (58%) say that immigrants strengthen the country because of their hard work and talents, only 33% of Republicans agree — a 25-point difference.

A majority (55%) of Republicans say immigrants are a burden because they take jobs, housing and health care. Only 36% of Democrats hold that view. Independents line up mostly with Democrats on the question, with 51% seeing immigrants as strengthening the U.S., while 38% regard them as a burden.

In addition to the partisan divide, there are racial and ethnic differences in views of immigrants. About three-quarters (74%) of Hispanics say that immigrants strengthen the country because of their hard work and talents. About half of blacks (52%) also say that immigrants strengthen the country, compared with just 41% of whites. Blacks and Hispanics are also significantly more likely than whites to say that the growing number of newcomers to the U.S. strengthens American society rather than threatens American values. Read more 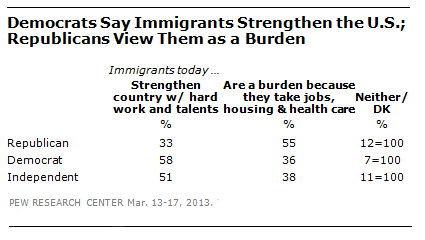 Majority of Americans continue to say immigrants strengthen the U.S.

On views of immigrants, Americans largely split along party lines

What Americans want to do about illegal immigration