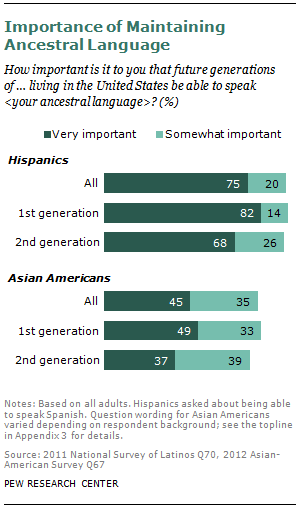 The importance for future generations to retain the ability to speak Spanish is felt even more keenly among first generation Hispanics. More than eight-in-ten (82%) of foreign-born Hispanics feel that it is very or somewhat important.

While second generation Latinos place high importance on retaining the ability to speak their native language, they are  also highly proficient in English. The vast majority (93%) report they can speak English very well or well. However, less than half (48%) of foreign-born Latinos can converse in English either very well or well. One-fifth (20%) of Latino immigrants speak no English at all, and about one-third (32%) don’t speak the language well. Read more