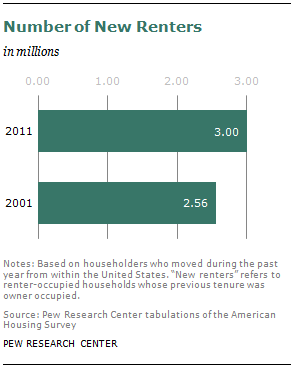 The increased movement from homeownership to renting was concentrated among younger households, though not exclusively households younger than 35. In 2001, 123 out of every 1,000 eligible young adult homeowners became renters over the prior year. By 2011, the new renter rate among young adult homeowners had increased to 139. The new renter rate is much lower among households 35 and older and did not increase as much over the decade.

The recent mover data suggest that the attraction to homeownership among renters clearly declined over the decade, but that tendency among young adults was no more protracted than among other adults. Read more