While Americans are somewhat more inclined than Western Europeans to say that it is sometimes necessary to use military force to maintain order in the world, 62% of people in France shared that view in a survey conducted March 21 – Apr. 5 2011, before the current French intervention in Mali. 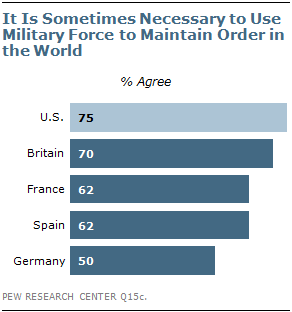 In Britain, France, Spain and the U.S., conservatives, are more likely than liberals, to agree that the use of force is sometimes necessary to maintain world order. However, in the four countries, majorities across ideological groups express this view.

When asked whether their country should get UN approval before using military force to deal with international threats, American opinion differs considerably from that of Western Europeans.

Americans are almost evenly divided on the question, with 45% saying that the U.S. should have UN approval and 44% saying this would make it too difficult to deal with threats. In contrast, solid majorities in the four Western European nations surveyed, including about three-quarters in Spain (74%) and Germany (76%) say their country should have UN approval before it takes military action. Read more

Americans are split on the principle of pre-emptive military force

As French, U.S. leaders push for Syria action, their people are united in opposition