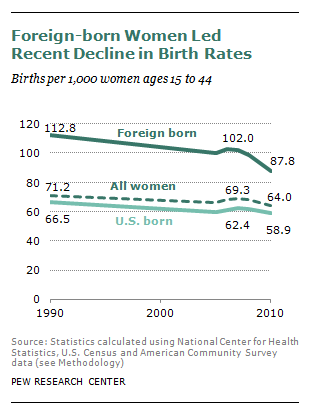 The U.S. birth rate dipped in 2011 to the lowest ever recorded, led by a plunge in births to immigrant women since the onset of the Great Recession.

Final 2011 data are not available, but according to preliminary data from the National Center for Health Statistics, the overall birth rate in 2011 was 63.2 per 1,000 women of childbearing age. That rate is the lowest since at least 1920, the earliest year for which there are reliable numbers.

The overall U.S. birth rate peaked most recently in the Baby Boom years, reaching 122.7 in 1957, nearly double today’s rate. The birth rate sagged through the mid-1970s but stabilized at 65-70 births per 1,000 women for most years after that before falling again after 2007, the beginning of the Great Recession.